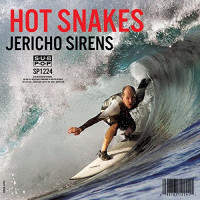 Hot Snakes come roaring back with their first new studio album since 2004’s Audit in Progress and a newly inked deal with Sub Pop. The label will be reissuing Audit in addition to 2000’s Automatic Midnight (my favorite) and 2002’s Suicide Invoice. Jericho Sirens witnesses the rebirth of the musical brotherhood of John Reis and Rick Froberg who both have been busy with their various side projects for the first decade of the new millennium until Hot Snakes’ reignition in 2011. Gar Wood returns on bass, and the album is the first to feature original drummer Jason Kourkonis and his latter-day replacement Mario Rubalcaba (also of the hardcore maniacs OFF! who in my opinion are Keith Morris’s best band) on split percussion duty.

To my ears, Hot Snakes always sounded like Drive Like Jehu sanded down to only the most essential elements, hard charging guitars and martial, pounding drums with Froberg’s inimitable howl and yelp propelling the whole careening vehicle. Jericho Sirens opens with the straightforward “I Need a Doctor” that finds Froberg in need of a physician to urgently help him shirk some occupational responsibilities. “Six Wave Hold-Down” is a surfing metaphor that warns against letting life pass you by, as Froberg acknowledges that “sets are rolling in” and you better “take the next one, or the next one, or the next one in.” “Death Camp Fantasy” finds the band addressing the disorienting existence of life in the 21st century as they ask the double entendre, “Have I been preyed (prayed) upon? By Darwin, Disney and Freud?” Jericho Sirens is the soundtrack to our collective modern anxiety and obsession with physical and mental destruction.

If you’re familiar with the rest of Hot Snakes discography, the majority of Jericho Sirens will not come as a major surprise, but the band has allotted space to add new wrinkles and facets to their sound while pursuing their core primal purpose. This time around, the band lets in some sour chord progressions that remind me of Jawbox, like the seasick “Candid Cameras.” “Having Another?” searches to find every way to let the guitars divebomb all over the track. “Death Doula” circulates a taut barb wire of guitar riff and keeps winding tight without hope for extrication. Reis admitted in the Sub Pop prerelease press that Hot Snakes usual modus operandi was “tension and release,” but Jericho Sirens is mostly tension as the band finds an effective riff or phrase and pummels it against the back wall.

Jericho Sirens is your perfect opportunity to venture down the rabbit hole of these indefatigable rock and roll lifers. First, marvel at the post hardcore mastery of Drive Like Jehu, and then allow ample time to explore Rocket From the Crypt, Sultans, Obits, and OFF!