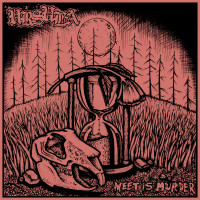 Where exactly does one draw the line between punk and metal these days? The short answer is you don’t really bother with those sort of distinctions if you are in the business of melding brains and causing head cramps, something that Ursula are seemingly all about.

This four-piece from Apple Valley, California is one powerhouse of a band to be reckoned with and which blurs those arbitrary lines on every step of their debut EP. Stylistically they bring to mind the sort of chaotic mash of grindcore and fast hardcore, caught somewhere between Cloud Rat and Punch.

Although the band’s heavy, technical sound brings them closer to metal than to punk, every now and again there are some rather sweet punk rock guitar riffs or hardcore bass lines that break things up a bit, enough to let loose and allow one to head bang or slam dance. Although these less complicated moments are few and far between, they come at just the right moment.

Whitney Marshall, who is also in the more conventional crust-orientated Homesick Abortions, handles the lead vocals with great confidence and power, screaming the lyrics with a sense of unrelenting urgency and convictio. Her performance really compliments Ursula’s introspective lyrical approach, where personal issues allude to greater, social affairs. Unfortunately this is not always as clear as perhaps intended, with the notable exception being on “Todd Darsh (Life Sucks)”, where their vegan stance is openly and outright addressed.

At only eight tracks that clock in at just over eleven minutes, Ursula seemingly don’t fuck about and get straight to the point here. By eschewing the standard verse-chorus structures, every single moment though is fully taken advantage of making for a rather intense and varied – albeit short – ride.