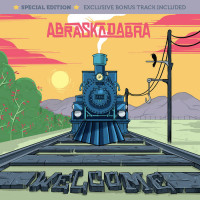 In 2018, telling someone you play in a ska band can go a couple of ways. On one hand, people can think of the 90’s when ska was everywhere from movies to mainstream media, or people can go “is that still a thing?” One look to the underground will prove that the bands from the 90’s like The Mighty Mighty Bosstones, Less Than Jake, and even the Suicide Machines, not only still play, but can rip as hard as they did 2 decades ago. On top of that, there are newer bands rising up, carrying the ska-punk torch for the next wave to come, like We Are The Union, Keep Flying, and Abraskadabra.

Abraskadabra are a 7 piece ska-punk band from Curitiba, located in Brazil of all places. They have been around since 2003, however have come to the forefront thanks to a cover of “Not Your Savior” by No Use for a Name, that was in the recent Fat Wreck Chords Documentary. In their lengthy career, they have been able to share the stage with some heavy hitters like Bad Religion, Rise Against, Flogging Molly, Fishbone, Streetlight Manifesto, Less Than Jake, Reel Big Fish, Pauline Black (The Selecter), Goldfinger, The Toasters, Voodoo Glow Skulls, Satanic Surfers and many more. With the 2018 release of their full length album, “Welcome”, they have a tour across the United States planned.

But how does it sound? The album sounds exactly like the reasons I got into ska 20 something years ago, and the reasons I still like it today. High energy, melodic, catchy, bouncy, and every other adjective you can think of. Punky triple time songs like “Heavy Hitters” with soaring horn lines, gang vocals, and distorted upstrokes, all jammed into a minutes length, followed by “Left Corner”, a more traditional third wave style song that easily sounds like it came from Mustard Plug’s Hopeless catalog. “Wheel of Fortune” starts with a clean guitar intro, luring the listener to catch their breath, but kicks right into overdrive, with horns playing the role of guitar leads, right from the songwriting chart that made Less Than Jake famous. At 12 songs, the influences and styles range all over from the above mentioned bands, while adding their own 3 vocal attack for a fresher take.

Abraskadabra have a few releases out there, this being technically their 2nd full length album, but it sounds like it could have been their 4th or 5th, as this is absolutely not the sophomore slump that can happen to bands. I am looking forward to catching the band when they play Chicago and see how the tour is treating them. If they moved to the United States, I could see this group being a household name in the underground, carrying the torch of ska-punk to come.