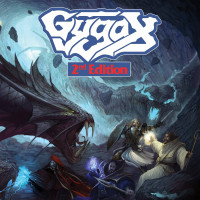 On paper, I probably shouldn’t like this. Gygax is a band that sounds like Thin Lizzy and writes songs about Dungeons & Dragons. I grew up listening to classic rock and dig a little Thin Lizzy, but I don’t have any particular affinity for them. I also never played D&D growing up in rural Wisconsin. I’m pretty sure that most of my good-hearted but naive neighbors thought it was Satanic. Nevertheless, here I am enjoying the hell out of Gygax.

The Ventura, CA quartet is the brainchild of former Gypsyhawk bassist/vocalist Eric Harris and is named after D&D co-creator Gary Gygax. 2nd Edition is the band’s second LP (duh), and gets its title from the popular Advanced Dungeons & Dragons 2nd Edition from 1989. Opening track “Dice Throwers & Rock n’ Rollers” could be the band’s mission statement. Lyrically, it really kind of sums things up without going full fanboy. About a minute in, the dual lead guitars start up and you’re likely to be hooked. (You should listen to this with headphones at least once.)

The fact that I enjoy this without knowing what the hell they’re talking about speaks to the quality of the songs. Tracks like “The Lascivious Underdark” and “Song of the Silver Hands” go way over my head, but still manage to get stuck in it. (What I can tell you is that “Lascivious” is a love song of sorts, and that “Silver Hands” throws in some tasty horns.) On “Pure Hearts”, Harris manages to capture the essence of Thin Lizzy bassist/vocalist Phil Lynott at his most soulful. Second last song “Heavy Meddle” is heavy on the pun, but has no drums and is actually the mellowest track on 2nd Edition. Closer “Second Wind” is a straight up rocker with some pounding piano.

Gygax is a band that will appeal to the sword and sorcery crowd who doesn’t care for extreme metal. The vocals are clean, and the music is largely 70’s influenced and top notch. It has a level of novelty, but its quality more than makes up for it. In the end, 2nd Edition is an album that I really enjoyed listening to. It has an intangible but uplifting quality. If you’re looking for something a little different, you should definitely check this out. It might just make you happy too.