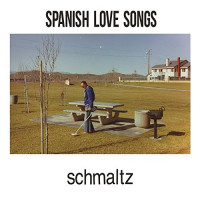 Let’s get this out of the way right up top. Spanish Love Songs sound eerily like The Menzingers. It’s almost uncanny: Leader singer Dylan Slocum’s vocals and pessimistic lyricism, the lead guitar over chunky riffs, the gruff pop punk, the distant vocal effects that start the album, a ballad-esque number for good measure. It’s all there. If 2015’s Giant Sings the Blues was A Lesson in the Abuse of Information Technology, new album Schmaltz is their Chamberlain Waits.

Schmaltz is a great record, one easy to see rowdy punks everywhere connecting with. On recent single “Bellyache,” Slocum yells, “Cause I don’t think I could fix this if I found God. There’s no drug in the world that could possibly wash this off,” in a way that begs to be shouted back. And the album is chock full of these moments, always culminating in a huge chorus. Especially on “Buffalo Buffalo,” with its slight pause before jumping into, “Would you meet me in the middle?” The pause allows the song to absolutely explode and shows how aware Spanish Love Songs are of their own sound.

“My dad says that I’d probably have more fans if I could learn to sing about some happier shit,” Slocum sings on “The Boy Considers His Own Haircut.” While that's possibly true, it’s the schmaltz that gives the album its title and connection, marinating in those dark places we all visit. And there are plenty of these melancholy gems: “I’ll die just how I lived, stealing from someone I found great.” (“Bellyache”) “Please don’t judge me for the failure I’m gonna be!” (“Sequels, Remakes and, Adaptations”) “You might change your hair, but you’ll always look awkward.” (“Aloha to No One”)

And while Spanish Love Songs aren’t reinventing the genre, they are capable players well aware of what works for their audience. Bassist Gabe Mayeshiro and drummer Ruben Duarte push the songs forward and ease them in and out of the soft-loud transitions. But the guitars still get all the fancy little licks. There’s hardly a song where Slocum and Kyle McAulay don’t get to have a little fun on their six strings.

Spanish Love Songs have the aggressive melodic sound that resonates loudly. Schmaltz will almost certainly find its way into the hearts of many Punknews readers. I haven't been able to turn it off yet.

The Lawrence Arms: We Are The Champions Of The World: The Best Of