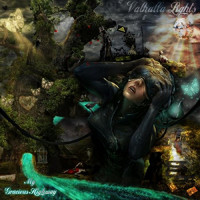 Valhalla Lights are a new(ish) band, but one with a pretty lengthy pedigree. They’re made up George, Brent and Deon from Aussie stoner outfit FORT - who have played together for a total of 17 years now. During that time, they played with the likes of Fu Manchu, Brant Bjork & more besides - which probably quite accurately suggests they’re more at the classic/heavy rock end of the stoner spectrum than the likes of say, High on Fire or Sun o))). Bringing vocals to the band is Ange Saul, previously of The Black Lullaby.

As I say, the band have a heavily classic rock-influenced sound and apparently favour vintage guitars and amps to assist in making their sound as authentic as possible. For the record, I’m pretty partial to this sort of stuff - Greta Van Fleet being one of my favourite debuts of last year - and although Valhalla Lights don’t ape any one band in quite the way that GVF do, the riffs are definitely packed full of the hip-swinging sass that you often find in bands from the genesis of heavy rock and metal.

Down to business then - the album roars out of the gate with “Rise Above” - a no-nonsense stomper with a lead riff that cannot fail to grab your attention. But sadly, my excitement at the opening of the album didn’t continue.

I have really agonised about this record and how much I like it - the main reason being Saul’s vocals. Technically, they are absolutely on point. Good range, carries a tune very well, etc - but I just don’t feel power in it the way I would like. Maybe she suffers from being compared to some of the powerhouses associated with classic heavy rock like Robert Plant, Roger Waters, etc but even beyond fundamental power, I don’t really feel much character in her voice, I’m afraid to say. I really wish I did - because a lot of the songs on this record are, musically, great - but I can’t help feel a pang of disappointment at those points where I really want to vocals to soar. I accept it’s not fair to compare them to Zeppelin/The Who, but it seems less unreasonable to talk about Greta Van Fleet (again, sorry...) and although I accept that Josh from GVF sounds incredibly like Robert Plant and clearly takes cues from him (by his own admission), if there was a vocal performance, male or female, of that quality over this record, I’d be delighted to be writing it up as a really great album, but as it is, it just never hits the heights I wish it did.

Making matters worse for Valhalla Heights, only a month ago, Black Moth released their latest Anatomical Venus. A record which, on paper at least, has many similarities to this one. However, Black Moth’s effort has a stronger vocal performance, greater diversity, a stunning production job and less in the way of ill-advised Adele-esque ballads that stop the album dead in its tracks (I’m referring to “The One” on this record).

I looked at the promo notes for this record & immediately thought this will be something I dig. And at times, I really do. But I can’t help feeling that both the band and Saul have compromised on their preferred styles to meet somewhere in the middle and the actual content and potency of the record really suffers as a result.

There are thrilling moments - many of the intros sound fantastic, but they never really get into 5th gear when the body of the song/vocals kick in. The amount of tracks where I have had to confess to myself that the first 25-40 seconds of the song are my favourite, tells its own tale (“Rise Above”, “Escape to Silence”, “Someday”, “Running” to name a few). At various times in those snippets, you can feel the influences from AC/DC, Soundgarden, QOTSA & more. But where these moments are genuinely great, they’re rarely more than moments.

The Lawrence Arms: We Are The Champions Of The World: The Best Of

Queen of Jeans: Dig Yourself