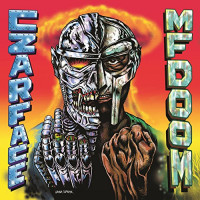 The first time MF Doom piqued my interest was with his short lived hip-hop duo, Danger Doom, consisting of himself and producer Danger Mouse. The album, which was released in conjunction with Adult Swim, featured songs about and featuring characters from the various Adult Swim shows at the time, including Harvey Birdman: Attorney at Law, Space Ghost Coast to Coast, and most notably Aqua Teen Hunger Force. The album was a brilliant piece of postmodern self-indulgence, and I was drawn to Doom’s mumbly-mouthed lazy flow. Danger Doom is one of the many collaborations that Doom has taken part in over the years, including Madvillain (MF Doom and Madlib), JJ Doom (MF Doom and Jneiro Jarel), and NehruvianDOOM (MF Doom and Bishop Nehru). In fact, most of Doom’s albums have been part of some sort of collaboration, and the ones that haven’t been were mostly released under pseudonyms, with only two solo albums ever actually released under the name MF Doom.

With MF Doom favoring collaborations so much, the team up with Czarface makes such perfect sense that it seems like these artists were always meant to come together. It’s a team up within a team up within a team up, as Czarface is already a collaboration between Wu-Tang Clan member Inspectah Deck and Boston underground hip-hop due 7LES, which consists of producer 7L and emcee Esoteric. Czarface has a running shtick in which they depict a comic book character named Czarface who is a superhero (although he looks more like a supervillain) and their music is laden with references to superheroes and comic books, with all their album covers designed to look like comic book covers. MF Doom has a similar shtick of depicting himself as a supervillain, hence the mask he wears (which was originally designed after comic book character Doctor Doom) and his collaboration with Madlib being called Madvillain. Therefore, as Czarface and Doom team up to create Czarface Meets Metal Face, a series of skits sets up a very loose narrative about Czarface being on the lookout for a villain to fight and coming across MF Doom, asking Doom to become his arch nemesis, under the justification that “Every hero needs a villain” (which also happens to be the name of one of Czarface’s other albums that MF Doom made a guest appearance on).

The first thing that comes across as you listen to Czarface Meets Metal Face is that the production of the album is absolutely outstanding. 7L puts together original beats that don’t sound like the typical hip-hop beats. Whether it’s the horror movie style instrumentals of “Phantoms” or the bright 70’s pop sounds of “Bomb Thrown,” 7L creates a soundscape that is always changing, often rhythmically complex, and never boring.

The three rappers, MF Doom, Inspectah Deck, and Esoteric are all extremely talented but have different styles, which gives the album a great sense of diversity. MF Doom’s style is slow and low, while Esoteric’s is fast and aggressive, and Deck falls somewhere between the two. The album becomes a clinic on complex rhyming, with such impressive gimmicks as Esoteric pretending to forget his lines in “Bomb Thrown,” but managing to keep his “stumbling” within the song’s rhyme scheme. Only two songs contain guest rappers, “Phantoms” and “Astral Travelling.” “Phantoms” features Open Mike Eagle, who might have been a mistake to bring on for this track because, as great as Deck, Doom, and Esoteric are, Kelly leaves all three of them in the dust with his brilliant verse about befriending a ghost living in his apartment, which ends with a truly hilarious twist. Esoteric then tries to keep up with Kelly on the track by pulling off the difficult gimmick of rapping a whole verse with almost every word beginning with an “f” or “ph” sound. “Astral Travelling” features Jedi Mind Trick’s Vinnie Paz, whose grizzly voice adds a whole new dimension to Doom and Czarface’s sound. Once Paz’s verse in the song is over, the whole song abruptly changes the beat and tempo, demonstrating the group’s impressive flexibility.

There are a few decisions on this album that weren’t necessarily bad, but were bizarre enough to make me wonder why they were made. For example, “Captain Crunch,” which appears towards the middle of the album, and “Captain Brunch,” which appears at the end of the album, are practically the same song. The two songs have different beats and different choruses, and “Captain Brunch” doesn’t have Deck’s final verse that appears on “Captain Crunch,” but other than that the two songs are lyrically identical. I don’t entirely understand why both were put on the album. Similarly, the song “Don’t Spoil It” features only Inspectah Deck, with Esoteric nowhere to be heard and Doom doing nothing but laughing and making passing comments, which makes me wonder why you would put such a song on this collaborative album rather than saving it for a regular Czarface release, or even an Inspectah Deck solo album.

There were two times that my transphobia detector started to go off, but both times the jokes failed to rise to the level of true offensiveness. For example, in “Captain Crunch”/”Captain Brunch” Esoteric uses the line “It takes balls like a sex change.” It gave me a moment of pause, but when I stopped to think about it, it’s technically not making a value judgment, so as a trans person I’m going to give them a pass on that one. Then in “MF Czar,” Deck says “I never wore women’s clothes,” then fails to follow that up with anything contextualizing his non-sequitur statement. It’s almost like he was about to make a transphobic comment, then forgot to tell the punchline. So I can’t call them transphobic comments, but they were suspect enough to turn my head for a moment.

In conclusion, this is my favorite hip-hop album in quite a while, and easily my favorite hip-hop album of 2018 so far, even beating out the Kendrick Lamar-curated Black Panther soundtrack (which was excellent, but which I chose not to review because I didn’t think a white girl’s opinion on that album was really what was needed). Czarface Meets Metal Face is intricate, complex, and shows off some truly impressive talents on both lyrical and production levels. It’s dense enough of an album that there’s more to discover on multiple listenings, making for an album that doesn’t get boring easily and will continue to play in heavy rotation in my music for a long time.

Queen of Jeans: Dig Yourself