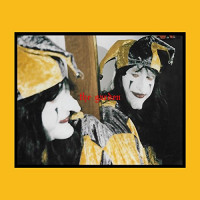 As insanely prolific as the twin brothers in The Garden are- if you count their side projects the pair have over 50 releases in 10 years to their names- one never gets the impression that their works are tossed off. Spontaneous or freeform, perhaps, but the band’s releases always seem to have a certain askew contemplation behind them. Mirror Might Steal Your Charm, the brothers’ fifth album, underscores this with recordings that are paradoxically, among the pair’s most matured as well as most unpredictable tracks to date.

Mid-album track “Who am I going to share all of this wine with?” illustrates this as much as any other tune on the album. Opening with a driving, rumbling bass that would make Peter Hook green, the brothers ride the gnarly groove before suddenly shifting into a sharp, haunting clang, only to fade out with a noise freak-out including bluesy sax. That is to say, for pretty much the whole album, it feels as through the Shears brothers are at the tip of a wave, crashing forward. But instead of floundering, they ride from one interesting collision to the next propelled as much by the thrill of the unexpected as their own hard to crack psyches.

No doubt, one of the enduring charms of the Garden has been the brother’s weirdness. (Though, one wonders if they think they’re weird and if they would be insulted if told they’re weird…) But, no matter how you slice is, this group is unusual. Few groups have been so eager to blend together lo-fi electronics with raw, garage-punk drums and bass (if any) and astoundingly, the Shears brothers fine the through line between the two mercurial fields and tie them together. They have been mashing electronics with the analogue for a while now, and their fourth album, Haha found them finding the connecting sweet spot. But, whereas that album focused on contrasting the two attacks, here, the brothers weave their askew electronic experiments directly into the fabric of their live instrumentation. “A message for myself” is a frantic rant carried by a soundclash of the two sides, except that it works together to make a shifting web.

That’s not to mention the band’s somewhat alien perspective. The duo seem to switch between sharing honest, if someone cryptic axioms. “Message” has the wonderful thesis, “Keep in mind, everyone is equal. Nothing makes you more human than anyone else.” But, for each Aesop style declaration, the band also adds a more labyrinthine comment. “Message” ponders resurrection in a twisting narrative. The heavyweight smasher, “Voodoo Luck,” which is one of the duos nastiest bass/drums numbers to date, details a sort of restlessness while the brothers hiss out, “Getting’ tired of fixin’ things, constantly looking around, my space is personal and now it seems that’s it voodoo luck.” I have no idea what this means. That being said, this doesn’t seem to be random word assemblage, but more like something strange and peculiar trying to communicate on a different level. As this hard rumbling and spastic beeping tracks spin by, it becomes more and more apparent that not only is this the way to play it, but these two different outside strategies work together to create something unique and previously untapped.

“We do our own thing see,” the brothers muse on “Banana Peel” and boy is that true. Likewise, closing track “No Destination” has its mandate spelled out in its title. Yet, that being said, this album doesn’t feel aimless. To the contrary, where previous Garden albums have found the band darting out in all directions, Charm finds the band finally settling into what they truly are, which is something unusual indeed. The only question now, is will they further grow out this form, or rapidly shed this exterior into another being going forward? Don’t bother making a guess. For all the summation of their previous works found on Charm, there is a newfound stability that only highlights just how unpredictable this group is. To further press the matter- unpredictability doesn’t always suggest thoughtlessness. Rather, it can suggest being three or four steps ahead of everyone else.

Out Live Death: Has the Past Taught Us Nothing?