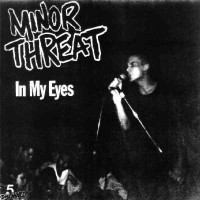 In My Eyes, the second EP released by Minor Threat, was released in December 1981, less than six months after the release of their first, self-titled EP. Where Minor Threat established the band’s anti-drug/anti-alcohol platform, In My Eyes helped to further establish that platform. It also sparked some of their earliest controversies, even within the band. Still, the EP itself, in all its seven and a half minutes of glory, contains some of the best hardcore songs ever recorded.

As I’m sure other reviewers have mentioned in their reviews, you don’t necessarily have to share Minor Threat’s straight edge lifestyle to appreciate how good their music was. The movement’s philosophy is summed up on “Out of Step” as it appears on this album: “Don’t smoke/Don’t drink/Don’t fuck.” (If you feel like there’s a very important word missing from those lyrics, we’ll get to that.) So basically it’s anti-drugs, anti-alcohol, and…well, the last part of the philosophy is a little more confusing. I always heard that was supposed to mean anti-casual sex, or “conquestual” sex as MacKaye once put it in an interview. But in some discussions behind the scenes with some of the other Punknews staff members, I realized that a lot of people took it to be completely anti-sex, or at least that that was his original intention when he recorded the lyrics. Regardless, whichever way you interpret the “Don’t fuck” part of the movement, I honestly think all the straight edge punks in the world that have actually followed the sex provision of the straight edge platform could all fit into one porta-potty. And then they’d fuck in the porta-potty. I’ve met more than a few punks with X’s on their hands over the years who were surprised to know that the straight edge lifestyle had anything to do with sex.

Musically, “In My Eyes” is one of the best hardcore songs ever written, with its wild tempo swings, simmering build ups, and blistering choruses. It’s such a brilliantly written song that the only notable cover of it came from one of the most technically skilled bands of the past thirty years whose guitarist is generally considered one of the best of all time: Rage Against the Machine on their 2000 covers album Renegades. Lyrically, it’s a pretty angry anti-drug song (with a little bit of anti-fucking thrown in for good measure) that’s very judgy in its tone. It’s one of the things that became controversial about MacKaye’s straight edge stance, but it became even more controversial once you got to track two of this EP. But I still stand by the last line of the second verse in “In My Eyes” as a personal mantra: “You tell me I make no difference./At least I’m fucking trying. What the fuck have you done?”

Track two, “Out of Step,” caused controversy even within the band itself, as the other band members started to worry that MacKaye’s lyrics were not just espousing a personal philosophy, they were telling other people how to live their lives. Drummer Jeff Nelson insisted on trying to turn the lines “Don’t smoke/Don’t drink/Don’t fuck” into “I don’t smoke/I don’t drink/I don’t fuck.” MacKaye refused to add this to the song. Nelson snapped and shouted “You don’t do these things! But I might want to!” MacKaye responded by going upstairs and kicking a hole in Nelson’s door. Eventually this led to the rerecording of the song on the album which would also come to be named Out of Step, where MacKaye clearly adds in the “I” at the beginning of each statement and a speech right before the last chorus saying “This is no set of rules, I’m not telling you what to do...” The speech may or may not have been an actual argument between MacKaye and Nelson that was surreptitiously recorded by the producer.

Okay, so we’ve gotten through some of the controversies of the band’s straight edge stance, so surely we’re done with the controversial stuff, right? Okay, what’s track three called again? Oh, yeah. “Guilty of Being White.” Shit.

“Guilty of Being White” has often been accused of being a racist song and, frankly, I completely understand why. The song is about being blamed for slavery and racism simply because you’re white, even though you’re not responsible for any of it. Okay, on the surface, that’s an okay sentiment. But the problem becomes that a common rhetorical strategy of white supremacists is to try to depict white people as the “true” oppressed race. “Guilty of Being White,” whether MacKaye intended it or not, sounds similar to many of the arguments of white supremacists. If “Guilty of Being White” came out today, I would never dream of giving a band a pass on that, especially with how prevalent that sort of rhetoric is starting to become in the rise of white nationalism. A recent alt-right hashtag circulating on Twitter, “#ItsOkaytobeWhite,” is linked to some very racist material, and isn’t that far off of a statement from the title “Guilty of Being White.” MacKaye’s response is that he wrote it as a song about his experience being a white kid in a majority black school who was bullied for being white, and he never thought the song would be heard outside of his small group of friends. That’s all well and good, but it doesn’t change the fact that there’s a context in the larger world that does make this song look racist, and makes it a potential tool for racism, such as Slayer’s famous cover of the song where they changed the last line of the song to “Guilty of being right,” which MacKaye, amongst many others, found extremely offensive.

The album ends with something finally devoid of controversy: “Steppin’ Stone” (better known in other versions as “(I’m Not Your) Steppin’ Stone”) a cover song originally written in the 60’s, first recorded by Paul Revere and the Raiders in 1966, made famous by The Monkees later that same year, and previously covered by both the Sex Pistols and Johnny Thunders. The Minor Threat version works so well, starting out tinny and distant like a recording of a recording, as instruments slowly start to work their way into the foreground of the song, filling out the sound. As the song wraps up the short four song EP, we leave behind a complex and challenging journey along these songs that hasn’t always left us with easy answers. But it’s still some of the most technically impressive hardcore to come out of its time, or any time for that matter. At times sloppy, but never lazy; at times controversial, but never poorly thought out. This is, for better or worse, one of the most important hardcore albums ever made.

Out Live Death: Has the Past Taught Us Nothing?