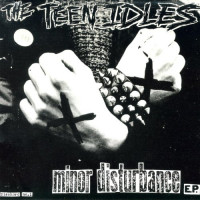 Broadly speaking, the general consensus in the punk rock community was that a band called Minor Threat sprung up out of Washington, DC, played lightning fast music, and in doing so, revealed to the world that destructive, nihilism might actually be a bad thing and also that you could put out your own records and be successful without any “true” label. This band then went on to launch hundreds of thousands of other bands built around these two simple, yet profound concepts… except that story might not be true.

Revisiting any number of contemporary documentaries suggests that Minor Threat (perhaps coupled with the Bad Brains) was this lightning-in-a-bottle self contained big bang. But, upon research and nearly 40 years contemplation, it seems that this is not the correct approach. Rather, Minor Threat was the third incarnation of a philosophy started by Ian Mackaye, Jeff Nelson, Geordie Grindle, and Mark Sullivan on the Slinkees, a short lived punk band that laid the foundation for MacKaye’s, and to a lesser extent, Nelson’s future philosophy. While that band lasted a mere one gig before breaking up, it evolved into the Teen Idles, with singer Nathan Stejcek replacing Sullivan. In fact, the Teen Idles even took a few Slinkees tracks as their own.

The band’s sole proper EP, Minor Disturbance (see the theme growing here?) was a lightening fast 8 track charger crammed onto a seven inch record. Created as document after the band broke up, the release said what Minor Threat was going to say just a few years later. “Sneakers” admonished “put on your sneakers and be a kid” to the youth who were rapidly reaching for a more self-destructive existence. Of course, this is the brewing ground for the genre changing “straight edge” and “in my eyes” which would be released just a year or two later. Likewise, while many punk bands were moving towards a more, more rule based set of lyrics, Teen Idles were still investigating the more abstract, dare we say ambiguous existentialism, of punk’s first wave. On “Getting in my way,” penned by MacKaye, Stejcek called out, “My vision’s clouded, the sun is dark/ I’ve lost my way/ I’ve lost my mark.” In lieu of macho chest-pounding, we saw an earnest vulnerability.

Still, there was some youthful mischief tucked into this release despite the band’s more serious intonations. “Deadhead” jacked a line from the Grateful Dead’s “Casey Jones” and mocked the band’s “druuugs are greeat, maaaaan” mindset . There were two important marks here. First, again we see a try honesty in MacKaye’s lyrics- he;s not trying to “pose” or fool anyone into thinking he’s a Darby Crash Jr. To the contrary, he was deliberately setting himself apart from the crowd. Secondly, we see the germ of MacKaye’s personal philosophy being open to interpretation… and misinterpration. That is to say, it was easy to take these kind of lyris and forge them into a weapon with someone who doesn’t agree with you- a crisis that would plague punk in the mid 80s and to a degree, still plagues punk to this very day. Whereas MacKaye was preaching non-conformity, it was not too had to use his words as molds to induce conformity of behavior.

Of course, it needs to be said at just how bombastic the sound was on this record. Seemingly as fast punk gets, Strejcek literally screamed the lyrics while the rest of the band tore along, barely holding it together. The economic, honed attach of Minor Threat wasn’t here yet- that may be one of the reasons none of these songs have quite the staying power of the Minor Threat classics. Still, the rising buzz of “Sneakers” followed by its proto-breakdown clearly shows young band members rapidly moving towards some of the greatest punk licks of all time.

No doubt, Minor Threat impacted more people simply due to its popularity and reach. That being said, Minor Threat wasn’t created in a vacuum, but rather, was a tool that had been honed and refashioned at least twice before. But, no matter how you spin it, it is interesting that values that MacKaye championed at the young age of 15 are ones that not only he still holds onto this day, but ones that millions of people cling to just as tightly. Thus, this leaves the question: was MacKaye simply lucky that he stumbled onto these ideas and was able to project them or was MacKaye so far beyond most artists that he was able to simply and concretely express an idea that was desperately needed? To rely on the former seems to de-value MacKaye’s contributions but to lean on the latter suggests that MacKaye is some sort of a God. Neither of these answers seem to satisfy completely, and both require independent self-analysis to truly have their merit tested. Now that’s fitting.