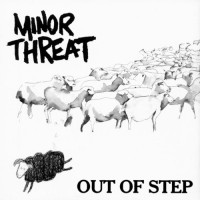 Even though it was released less than three years after their formation, Out of Step found Minor Threat as a much more wizened, world weary band than their previous EPs suggested. Recorded after the band’s first break up, Out of Step finds the band reacting to a movement that they basically singlehandedly created.

Gone were the “simplistic,” single-riff chargers like “Filler” and “Small Man, Big Mouth.” In their place where multi-parted, sometimes purposefully unevenly gaited mini-epics like “Betray” and “Look Back and Laugh.” Minor Threat certainly had a substantial hand in creating hardcore during its nascent stage, but already by their first proper album were they creating what would become post-hardcore. See “It Follows” which is more based in a low, rumbling clack than a speed-up rock riff, which also has a brief spoken word section and ends with whistling. That’s not to mention that whereas Ian MacKaye used to ride the riff for maximum fist pounding power, here he was deliberately singing against the music in order to create a more difficult, and more multifaceted contrast.

In part, this may have been the addition of Steve Hansgen on bass, giving the band more room, and more tools to create their wall of sound. Depending on who you ask, this was either the band’s next logical step of their eventual undoing. None of the tracks here are quite as catchy as their first two eps, but that may have been the point. Where the earlier works seemed to pull from gut and heart, Out of Step seemed aimed to stimulate the brain and conjure contemplation instead of youthful impulse.

But, where the music was evolving, the lyrics were keeping up or more. A lesser spoken Minor Threat tidbit is how often the band fought and how fractured they were. Minor Threat is often spoken as this singular, monumental force that changed an entire scene. While that is true, the band’s affect likely wasn’t due to team consensus, but rather, a combination of philosophy contrast and pure luck. That is to say, these guys fought. That’s plainly evident in the lyrics. On “Look Back and Laugh,” MacKaye muses that things that seem so important now might not hold the same weight in the far future. “Betray” tells you all you need to know by the title alone.

Most notable is the album’s re-cut of “Out of Step.” Along with “Straight Edge,” the original version of “Out of Step” forged the entire straight edge scene and decades of debate in just over two minutes. The grand irony being that the band didn’t intend to forge a set of rules at all. In fact, Minor Threat seemed to feel that their original musings had been so perverted, or at least skewed, that they felt it necessary to name their first proper album after a re-recording of a previously issued song. The new version of “Out of Step” seemed to feature a frustrated MacKaye. While it started off more or less the same as the earlier version, the track on its second half found MacKaye break into spoken word and exasperatedly explaining that “Out of Step” isn’t a rule book, but rather, his own philosophy: the track was more intended as a queue for others to think for themselves than a mandate on how live one’s life. Even today, that message gets garbled and even lost.

Perhaps because their earliest tracks were so catchy, Minor Threat’s second half doesn’t always get the same spotlight. That’s a shame because whereas the band’s first half found them setting forth fundamental concepts that would shape punk to its very core, the second half found the band both clarifying their position as well as reacting to the rules and styles that were being built around them. Honestly, it’s rare to find seminal artists explaining their art to an eager audience during their original run- usually the “explanation” comes decades later and is clouded by age, revisionism, and bias. The fact that the message of Minor Threat’s first half is often given greater weight than the second shows how powerful ideas can be, and how also, once they escape the speaker’s lips, they really aren’t the speaker’s ideas anymore.