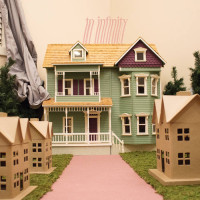 I loved The Art of Mothering three years ago from Special Explosion and since then, I haven't really heard much or followed up on the indie/dream rockers. Lo and behold, the new LP To Infinity, well, it really does take you there and beyond. It's 10 tracks of spacey, minimalist rock that paints a novel of hope, inspiration and promise -- much needed for the drama the world is intent on bringing to our doorsteps. Does it come near the standard of the last album though? Nope, but it deserves praise for its effort.

As expected, diversity's the name of the game. If you're a Death Cab For Cutie fan, then the slow, warm buzz of "Waterfalls" and "Gladiator" are for you. However, if you want to catch a post-rock train in the vein of Foxing, hazy guitars and soothing melodies are what you're looking for. That's where "Perfect Song" comes in, and yes, it's just that -- the album's best in my humble opinion.

Then there are the livelier and dare I say poppier tracks. "Your Bed" has a math-jazz feel to it a la Enemies, and "Fire" comes with an Owl City mainstream radio pop, thanks to its dense layers of synth and electric beats. Only, it's a zillion times better and from a rock perspective. All in all, Special Explosion remind me why I missed them with To Infinity... and hopefully, they'll put out more music on a regular basis. Some tracks fall flat but for the most part, this full-length works like a charm.