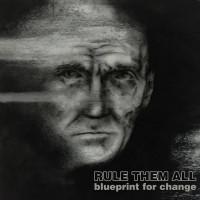 Rule Them All’s demo release on Reconsider Records calls back to an era in which hardcore punk had a genuine balance between angst, emotion, melody, and discord. I know, I know. That sounds sort of exaggerated, and probably even a bit condescending. But in this case it’s neither. Rule Them All finds me thinking about American Standard, Fugazi, and Dag Nasty. The demo is just three songs recorded in a basement. And maybe that’s another reason for the nostalgia.

The sound here seems decidedly nostalgic itself. The guitar distortion does not come with the modern thickness or slickness that one expects from today’s bands. Instead, Rule Them All work with a much more fuzzy distortion that certainly isn’t an indie or garage rock feel. But they also avoid the typical crunch of, say, punk or hardcore. “Run of the Mill” is exemplary here. The song opens with a great intro riff that draws on a The Who-esque class rock vibe. As the song moves along, the guitars crunch up just enough to give the band an edginess akin to nearly an of the late-80s Dischord releases. The bass come to the forefront of the song just long enough to lull the listener before the song closes out with a melodically edgy guitar riff.

“Blueprint for Change” is the demo’s most aggressive song, employing seemingly simple chugging guitars complemented by popping snare beats. The song draws on a more post-hardcore Quicksand vibe, even as it slows to a cymbal-heavy drudging closure.

The demo’s first song though is by far the strongest of the three. “So It Starts…” offers vocal patterns that beg for sing-alongs and finger-pointing with all the emotion and ferocity one might find at an early Dag Nasty show. We’re not talking hyper-aggro mosh pile-ons here. “So It Starts…” engages the listener on a more thoughtful and palatable level.

The demo clocks in at just over eight minutes total. And that’s not nearly enough for me. Rule Them All have offered three songs that I think the punk and hardcore underground need more than ever. There is littler sonic pandering here. The demo just sounds earnest and genuine. I’m hoping for much more to come from this band.