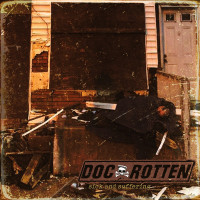 I really don’t like EPs and Doc Rotten is partially responsible for that. And I mean that in the most flattering way. Their newest release is just a mere 5 songs that leaves you wanting more, but that’s kind of the point, right? Our attention span has been destroyed and we tend to stop listening if we are not immediately pleased. But the Trenton, New Jersey based band has my undivided attention after listening to Sick and Suffering over and over for the last couple of days.

The EP kicks off with “Gates”, a track that runs just under a minute and a half. The song begins with the bass rattling off the same note for 15-plus seconds accompanied by pounding drums, a pick slide, and a Chuck Berry type guitar lick. All of this conjures a feeling of anticipation that is relieved once the passionate, gritty vocals fly out of the gates like a wild horse. The song lacks a true chorus, but who the hell cares. It ends with a quick repetitive, gang-vocal hook that will eventually have sweaty basement crowds, in the bowels of Jersey and beyond, singing along.

The second track, “Last Chance” is just as catchy and aggressive as the first. Once again, the band stays away from a typical songwriting formula. This leaves the audience guessing a bit, yet after the first listen it all makes sense. The band has, yet again, conjured up a sing-along that forces you to throw your fist in the air and scream your face off.

Tracks three and four are sonically similar to the first two songs and are just as erratic in reference to song structure. The changing rhythm in “Federation” keeps you on your toes, but it keeps those toes a-tapping. “Listen Up”, which starts with hammering drums, is the song that immediately stuck with me. I’ve been singing “punch you in the skULLLLLL, punch you in the skull” for days now.

The EP's swan song is the title track and it is the only song that surpasses the 3-minute mark. It shows a softer, slower side to the band, yet the grit and melody remain. The lyrics highlight the drug epidemic that is plaguing the nation and the song serves as a call for help for those who are addicted. Despite the dark subject matter, it is a perfect end to a perfect succession of songs.

Doc Rotten has released an EP that reminds me of the early Fat days, but it is also new and refreshing. And though they are in their infancy as a band, the group has produced a mature, tight sounding release that is a perfect mix of the basics. Hard pounding drums, bass, and guitar matched with layers of vocals and solid songwriting.

So maybe, just maybe, I’ve changed my mind about eps. I can listen to this on repeat and never get bored... but I still want more.

Downhaul: Where We Started