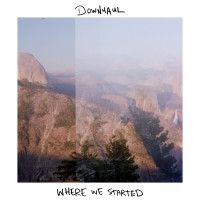 Where We Started is the third EP by American emo band Downhaul. Their previous EP, About Leaving was an unexpected, and extremely underrated, gem from 2017, quite easily cementing its place as one of the best of the year.

Now this EP feels like the band at their most realised, with opener ‘Double Time’ setting the tone for what’s to come, with its simple but infectious melody. Bands like Dowsing, Jimmy Eat World and Free Throw spring to mind, but Gordon Phillips’ vocals shine through, and leave a unique mark.

Downhaul excel at autobiographical lyrics, often telling a story over the course of the song. Second song ‘SMAK’ is the best example of this. The song is a slow build with no repeated chorus, but the break in the middle of the song gives way to noodly guitars and a dancey hi-hat rhythm. When it kicks back into the final verse, there’s a restrained energy, but the titular shout of ‘she may already know’ gives way into a huge, all-out climax.

‘Park’ suffers from a bridge which falls flat due to some vocal effects, making the song feel a bit too empty, but picks itself up in the outro with some great gang vocals. Again on closer ‘Coming Home’ there’s a sense of space as Pat Davis screams over a clean guitar melody, but this works much better and feels purposeful rather than a by-product of the mix.

There’s a lot to enjoy on Where We Started, it feels unique enough from the rest of the ‘emo revival’ scene, not being too pop-punk, nor too generic. A lot of great musicianship sets it apart, the bass being a particular highlight, and guitar melodies shining through on the majority of the tracks. Downhaul are an exciting band, and ‘SMAK’ is an early contender for song of the year.