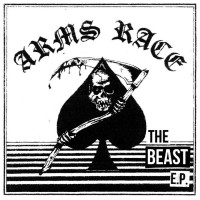 The UKHC scene has had its rather notable and highly-influential moments, but it has also had its fair share of barren or stagnant periods. In recent times things have been picking up again, with a number of British bands raising some eyebrows across the world. London-based Arms Race have been playing for a few years now and proudly proclaim to represent the “New Wave of British Hardcore”.

Arms Race essentially deal in frustration-fueled, fast punk hardcore with barked vocals that brings to mind early Agnostic Front and SSD, mixed with some GBH for a distinctively British edge; The Flex and Violent Reaction are the obvious contemporary points of reference. With death metal influences being all the rage in the late 1990s and early 2000s, this less complicated, grittier and raw approach is pretty refreshing.

The EP opens strong with the intro on “Zealot” paving the way for a short burst of anger, at which point the dirty bass line shines through and introduces a punishing mosh part. Similarly, “24 Hours” is straight forward in its approach, but mixes things up a bit half-way through with an early 1980s USHC-inspired guitar solo that expertly articulates the band’s frantic urgency.

The title-track may not be the most adventurous song, but it probably has the strongest mosh part in this collection of songs that will please both the studded leather jacket and the hoods-up brigades alike. The EP closes as strong as it opened, with the mesmerizing bass-line and drum beat intro on “Distort Britannia” setting an ominous mood. As the buzz saw guitars start and stop, the song eventually reaches the usual breakneck tempo, before coming to a sharp end. No feedback, no ringing sounds or samples, just dead silence.

While it may be argued that Arms Race’s regressive sound is not incredibly groundbreaking, their execution is superbly balanced and well-paced, keeping things consistently exciting and fast. There might only be four tracks on this EP, but it is more or less a perfect length so that Arms Race never outstay their welcome.

Blacklisted: Slow Moments b/w I Should Have Been A Murderer