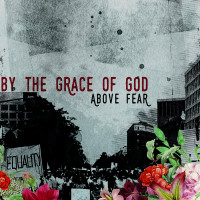 By the Grace of God

Louisville, Kentucky’s By the Grace of God return with their first musical offering in well over a decade. Above Fear is the band’s new EP, released on State of Mind Recordings, and it rocks along with the melodic hardcore sound that made the band so endearing way back in the 1990s. The EP does well in drawing on the sound they cultivated during their years in Victory Records while also mixing in a more modern and mature vibe.

Musically, the songs on Above Fear very much have the trademark Duncan Barlow sound that he refined in Endpoint and the original iteration of By the Grace of God. Barlow still has his uncanny knack for turning the typical horse-hopping verse riffs into more a melodic and profound sound. The opening guitar tracks on “Ann(e)” reflect Barlow’s signature sound here. The song’s verses teeter between the aforementioned horse-hop riffs and powerful octaves. The closing guitars on “Ann(e)” combine the heaviness of choppy start-stop movements with aptly placed melodic leads and rhythm tracks that give the song a very full sound.

For his part, vocalist Rob Pennington seems to have gained back the melodic cadences he harnessed in Endpoint but that were lost a bit on earlier By the Grace of God records. He seems far more aligned with the notes on the guitars than on previous releases. And he also delves more into the singing component vocally, a slight departure from the more staccato shouts he laid down on Perspective. The anthematic “A Forever Pledge,” the EP’s sixth track, is a strong showcase for Pennington’s melodic sensibilities here. He keeps pace with the speedy verses and skillfully slows his cadence down in the more driving choruses, all the while showing his range. From the high-pitched shouts familiar to By the Grace of God song to more drawn out tempos, the listener gets vocal stylings that are both diverse and infectious.

“Spikes to McConnell” is the EP’s heaviest song and is also closest in sound to both Perspective and For the Love of Indie Rock. The guitar work on the song deftly maintains the melodiousness of the rest of the EP. However, there’s no denying the heaviness of the song’s breakdown which brings fans of By the Grace of God back the band’s earlier sounds.

The lyrical content on Above Fear is typically political and intellectual. Remember, By the Grace of God never shied away from the political in their earlier days. And they don’t shy away now. Rob’s lyrics are both topical and clever. “(Drowning in) White Tides” tackles the racial divide in the country without necessarily being divisive itself. Similarly the aforementioned “A Forever Pledge” offers the listener catchy sing-along lyrics that seek bond people together in uncertain times. For the seasoned By the Grace of God fan, this introspective compassion isn’t all that new. For the newer listener, Pennington’s lyrics will draw you in and offer solace.

Above Fear is a great EP in its own right, and as the return of unarguably one of hardcore music’s most endearingly underrated bands. By the Grace of God put out some of the best records in the Victory catalogue during a time in which the label was powerhousing through the underground. Twenty-plus years later, By the Grace of God offer up yet another quality release from start to finish.