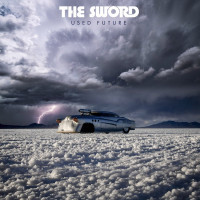 Can you believe that this is The Sword’s 6th studio album? Maybe it’s just my age, but I remember their debut Age of Winters coming out really vividly – and being super hyped on it as well, incidentally. Well, that was apparently 12 years ago now and The Sword have been pumping out records and touring them ever since.

When you look at The Sword’s music, the imagery they routinely use, and the lyrical content they put out, then you can’t help feel they would be more at home being called ‘Photon Torpedo’ or something along those lines. Apart from the debut (which leaned heavily on Norse/mythological imagery and themes), they’ve made no bones about being pretty much sci-fi obsessed. Third album Warp Riders was, in their words, “a concept album centred around an original science fiction narrative”. So now, with the release of this new record, they’ve finally made explicit the implicit and named the album directly after the sub-genre of sci-fi that they seem to favour. In fairness, it has to be said that the juxtaposition of the old and the futuristic isn’t entirely out of place when considering the band and specifically, this record.

So begins the Texans’ 13-track stoner/doom-inflected landscape that is unashamedly affected by, and simultaneously a love letter to, the ‘Western meets Sci-fi’ style of the original Star Wars trilogy and the like. After a brief prelude featuring keys, bass and a synthetic-sounding guitar to build a bit of ambience, the album launches into lead single “Deadly Nightshade”. 3 minutes of well-crafted, beautifully produced metal…that somehow feels a little more restrained than maybe it should do. But hey, it’s early in the album – so given that the next track is the second single “Twilight Sunrise” we should expect to be off to a flier, right? Well, yes and no. Twilight Sunrise also has big riffs, a bit more pace and a structure that is sufficiently interesting without straying too far from their fundamentally classic rock-influenced brand of metal. Again though, it feels like there are a couple of opportunities for the song to really take off and it never quite gets there. Aside from a couple of brief fills, there aren’t any solos in either of these tracks either, which is somewhat surprising, although by no means the end of the world, obviously.

Now for the good stuff – I have listened to this record quite a lot in the last few weeks, and not just through professional necessity. Although I’ve not really loved an album The Sword have made since Age of Winters, I have to say that this one is inveigling its way into my most-played records at the moment in spite of not having the immediacy of the debut, or arguably a number of the subsequent releases. I have to commend The Sword for the attention to detail in the record. Some of the synth that sits behind many of the songs does, when you consider the album through the lens of the ‘used future’ style, really put you in mind of being on a desert planet, looking up at multiple moons. Add to that the laser precision of Kyle Shutt’s guitar work (I am certain that the word laser would have been bandied around during recording) and the borderline digital feel of Bryan Richie’s bass tone, you have a really interesting contrast. On instrumental tracks “Intermezzo”, “Reprise” and even more so “Nocturne” the band truly are just painting sci-fi landscapes. Initially thinking the track a bit lengthy and superfluous (c.4 minutes), I have grown to love “Nocturne” more so than I would have thought likely. It manages with its oppressive synth, isolation-evoking piano and building cymbals to feel every inch something that John Carpenter would have made for a late-70’s sci-fi film and I suspect that’s about the best praise The Sword could hope for in relation to what they were aiming for.

Basically, I really like this record. It is likely to not sit too well with all fans of The Sword, but those who have come along with them as they’ve moved down their musical path over the years will probably love it’s scope and gunslinging, space cowboy ambience, especially if they give it the time it needs and deserves. I will admit that I wish there were a couple more real bangers on here, but the likes of “The Wild Sky”, “Book of Thoth” and the 2 singles do admittedly pack enough punch at their peaks to add to what is an already-stacked back catalogue that The Sword can call on to deliver a killer live set whenever they wish. If you’re going to listen to this, live with it for a week or two and see if it grows on you as much as it has on me. Yes, John D Cronise’s lyrics can be silly, yes, it’s not perfect – but it is at least fun and thematically stimulating.

War on Women: Capture the Flag