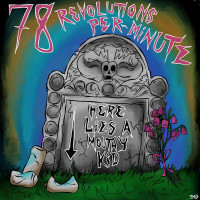 Put Out Your Own Records

I’ve been a fan of Grand Rapids, MI’s Tommy (sometimes Thomas) Gun for quite a few years now. His horror punk trio Murder Party! is one of my old favorites. His hardcore quintet Westside Rebellion is one of my newer favorites. 78 Revolutions Per-Minute is actually an offshoot of his acoustic solo material. Four of the seven songs on Here Lies a Mouthy Kid were previously released on his 2016 EP You Probably Won’t Listen to This. It’s interesting, because usually we get to hear full band songs stripped down to acoustic versions. Here we get acoustic songs built back up for a full band. It gives us a different perspective on the songwriting process.

In 78RPM Tommy is joined by Dan and Don from Bet On Rats, another one of my favorite local bands. Tommy sings and plays guitar, Dan plays bass and sings and Don drums. Dan is the main singer in his other band, and his vocal contribution here is significant. Don also recorded the nice sounding EP. Opener “Hey Man, Nice Set” features only Tommy’s voice and a single guitar. It cautions bands about getting too preachy with “Somebody get this loser a beer/This is a fucking dance floor/There’s no politics here”. Things really kick into gear with “Starving Artist Weightloss Program”, the song whose lyrics inspire the EP’s title. “Here lies a mouthy kid/Raised by a picket fence/Who means what he says when he screams”.

You Probably Won’t Listen to This was largely a love letter to the punk/DIY scene that Tommy grew up in, and so is this. “100 Bodies” lays it on the line with “Community with laws like any other/An earnest attempt to look out for each other/When everything we did was from the heart”. “Smiling Faces” says “The things that I heard at a show one night/Significantly improved my life”. (There might even be a nod to Rancid toward the end.) “Broken Records” is probably my favorite 78RPM song. (It almost certainly has a nod to the Descendents.) Its memorable refrain is simply “All I stand for/Are these broken records.”

There are a couple of brand new songs too. “New Drugs” is almost a depressing, (don’t make me say emo) slightly inverted take on the Huey Lewis & the News top 40 classic “I Want a New Drug”. Its catchy chorus sings “New drugs, new loves and better scars”. The music bears no resemblance, but the theme is similar. “Police Boat” is a kind of goofy, kind of serious tune that includes a satisfying gang vocal yelling “All cops are bastards/Even the ones in boats”.

Musically, 78 Revolutions Per-Minute exist at the ragged intersection of electric folk punk and pop punk. Tommy has a voice that isn’t really suited for pop, and it gives everything a certain edginess. The real reason this works is its unflinching sincerity. This level of earnestness could easily seem cornball in lesser hands, but it’s pretty obvious that these three guys stand behind every word they sing (or yell). Here Lies a Mouthy Kid is a tremendous debut for 78RPM. I’m definitely going to have to add them to my growing list of local favorites.