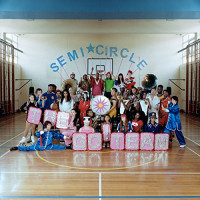 Very few acts in music are able to boast the banner, “unlike anything else out there” for long enough to be considered truly special. As soon as something seemingly new and unheard emerges, legions of imitators invariably follow suit. But for Brighton’s the Go! Team, now five full-lengths deep, the cunning blend of disparate styles has achieved two things: 1) a sound that’s at once ineffably unique to the group without ever settling on homogeny and 2) an aesthetic that’s apparently incapable of mimicry.

For much of the band’s nearly 20-year history, it seemed possible to parse out the elements that gave them their distinctiveness. Because there weren’t other acts blending what band-founder Ian Parton has described as Sonic Youth guitars, double-Dutch chants, police chase horn samples, Charlie Brown pianos and female-fronted, old-school hip-hop, one could reasonably argue there was a formula for the group’s novelty. Yet 2015’s The Scene Between eschewed so many of these devices it would seem unrecognizable as a product of its creators. Remarkably, it wasn’t. Despite the lack of horns, cheerleader-chant rapping, dance tracks, and vocals of mainstay frontwoman Ninja, the record still somehow managed to feel like one that only the Go! Team could manage to muster.

So while some have labeled 2018’s Semicircle a return to form, the reality is it’s just the Go! Team continuing to be the Go! Team and doing what no else can. Of course that’s not to deny that certain elements absent from The Scene Between are back in full force here. Ninja makes a triumphant homecoming, bringing her hyped-up Sugarhill Gang rapping to the booming bevy of Northern Soul horns on “She’s Got Guns.” In a sonically similar vein, “All the Way Live” is built deftly on samples of a lady-rap vocal track Parton somehow stumbled upon made by students of Carver Senior High in Chicago way back in 1983. Equally ingeniously, the ferocious surf-soul opener “Mayday” calls to mind earlier efforts like “Bust-Out Brigade” and “Titanic Vandalism” while its Morse-Code cadence stapled to the song’s meter cleverly spells out “M-A-Y-D-A-Y” to the majority of listeners who are likely none the wiser.

Not everything on Semicircle is a call-back, though. The record’s title-track enlists the support of the Detroit Youth Choir and more of a high-school-marching-band spirit than ever before, supplemented (as the Go! Team is apt to do) with a flourish of auxiliary instruments including steel drums, glockenspiels, and what sounds like either a theremin or singing saw. The sunny sound of steel drums also appear on one of the album’s standouts “If There’s One Thing You Should Know,” featuring vocals by keyboardist/guitarist/melodica-ist Maki and an unconventional song structure that goes something like: intro/chorus/instrumental verse/chorus/instrumental verse/recorder solo/chorus/bridge/outro.

The band dips into psychedelic flower-power territory with flutes blazing on the instrumental “Chico’s Radical Decade,” “Plans Are Like Dreams U Organize” and to a lesser extent “Chain Link Fence,” which wouldn’t have been out of place on The Scene Between. It’s difficult to pick highlights on a record as consistently incandescent as Semicircle but “The Anwer’s No - Now What’s the Question?” is a top contender, with a melody that calls to mind slowed-down Scared of Chaka over a layered Wall of Sound that includes guitars, chimes, glockenspiels, tambourines, and what just might be a droning sitar. Then again, the title of top-tiered track could also go to the luscious, brassy closer “Getting Back Up,” a 60’s pop-inspired number with a chorus that would give Petula Clark a run for her money.

For all the talk of what is and isn’t inherently part of the Go! Team’s inimitable style, such superficial focus feels insignificant at this point. The big takeaways from the equally big Semicircle are 1) the Go! Team are back and better than ever and 2) the Go! Team never really left.

Guided By Voices: Space Gun
Go to the review index