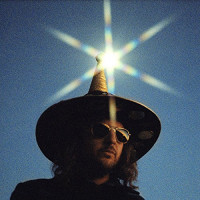 King Tuff’s (Kyle Thomas) fourth full length radiates in stark contrast to the wild witchcraft glam garage rock of his most recent offering Black Moon Spell. The Other begins with a gentle philosophical reckoning over a warm synth bed buttressed by gentle guitar plucking as Thomas wonders about “the reason to be alive at all” while suffering in the traffic jam from R.E.M.’s “Everybody Hurts.” The answer appears as the obtuse “other,” to Thomas it’s an undeniable call from “a long-forgotten lover” that drives a compulsion for creativity. Thomas admits the album is a departure from the “crazy party monster” persona that had pigeonholed King Tuff and is a more accurate reflection of his current mindset.

And then the sleazy saxophone kicks in! The title track is something of a ruse as the bulk of the album swaggers with a psychedelic strut and eyes toward the sun. “Raindrop Blue” sounds like the intersection of Iggy Pop’s Berlin records and Bowie’s plastic soul period as fuzzy guitars shadowbox with that greasy sax. “Thru the Cracks” sighs with an ethereal chorus (aided by that eternal indie chanteuse Jenny Lewis) that echoes Z-era My Morning Jacket as Thomas ruminates about our transience on this mortal coil when we’re “gone in a flash / Yes, we all fall thru the cracks.” “Psycho Star[‘s]” clattering percussion and murmuring keys recall a more insouciant Spoon as Thomas accompanies Sturgill Simpson on a turtle ride through our illusory universe. Despite the bevy of contemporary touchstones, Thomas makes this sound and evolved persona of King Tuff his own as each new permutation across The Other flows seamlessly into the next. This album is a perfect respite from the brutal winter storms as it ushers in some much-needed sunshine and barefoot sand transcendence.

The album cover presents Thomas as a shaman bearing witness to the power of our local star and is sonically represented in the scorching wah guitar and frenetic bongos on late album highlight “Ultraviolet.” As he journeys further into his search for the intangible “other,” he discovers that with the “ultraviolet coming down” “death does not exist.” Extrapolated simply, while we have our time in the sun, we have the ability to create and enjoy the creativity of others. As a further invocation of California daylight, the penultimate track “Neverending Sunshine” kicks off with a Dr. Dre-style g-funk squeal as Thomas starts going crazy from the heat with his ominous musing that “the time is gonna come…when I’m swallowed by the sun.”

The album culminates in “No Man’s Land,” the spiritual sequel and conclusion to opener “The Other.” Thomas learns to abandon himself, his former personifications, his own personal expectations and fully immerse himself in a new shroud of inspiration. He “abandon[s] his name” and takes a “blind-eyed leap / into the big old unknown.” The reinvention is a successful reinvigoration and makes for an album that will blaze through all seasons.

Useless ID/Tarakany!: Among Other Zeros and Ones
Go to the review index