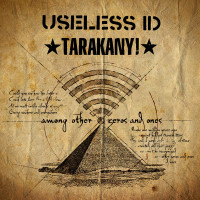 In the throes of the cold Russian winter of 2016, members of Useless ID and Tarakany! came up with the idea to make a split record. It was then that Yotam Ben Horin, Dmitry Spirin, and Dmitry Kezhvatov decided to pick a few of their counterpart’s songs, translate and record the tunes in the language that their respective bands typically record with. So Useless ID, from Haifa, Israel picked three Tarakany! songs to record in English. And Tarakany!, from Moscow, chose three Useless ID songs to record in Russian. The bands also collectively wrote and recorded a track called “Among Other Zeros And Ones”, the title track of the record.

It may seem like an unusual match, but the bands have a lot in common. Both groups are huge fans of the Ramones and have been putting out records since the mid-’90s. Also, all of the members of each group are either vegan or vegetarian. All of this coupled with similar sounds from very different worlds makes for an awesome partnership between two well-established punk bands.

Useless ID kicks off the record with 3 Tarakany! songs that Yotam fell in love with while on tour in Russia. The first track, “Yearbook” (“Ya Smotru Na Nikh”) is a song that reminisces about past friendships and acquaintances, describing where those ghosts are now. And though they didn’t write the song, it is classic Useless ID. The next track is “True Punk” (“Realny Punk”), a tune that seems to lament about the teetering battle between punk rock and mainstream music. Once again, Useless ID have put their spin on it and made it their own, all while maintaining the edge of the original Russian version. The band closes out with Ghetto Limits (“Granicy Ghetto”), one of Tarakany!’s more popular songs. It is a powerful and engaging take on a well-liked Russian punk song. Since their early days, Useless ID has matured into a more aggressive and more rugged band. And these three songs, despite being cover songs, are no exception.

On the flip side, it presumably seems really difficult to pick just three songs from such a deep catalog of great songs. But Tarakany! chose wisely. First, the band presents their take on “How to Dismantle an Atom Bomb”. It is hard to ignore the cold war connection here and it is easy to wonder if the band chose the song because of Russia’s participation in the arms race that plagues our world or if they simply love the song. Either way, their version does justice to the original song, while adding some additional authenticity to the track. The band follows up with their version of “Night Stalkers”, with lines that roughly translate to “what happened to our world, where there’s so much to solve right now?” It serves as another connection between the two bands that truly make sense. The last song they chose was “Live or Die”, which seems to be a more personal tune and it is interesting to see how it translates to Russian. Overall, Tarakany! have done an outstanding job of maintaining a level of quality that was already present in the original versions, all while adding a little flavor to each of the three songs.

The album closes with a collaboration between the bands on the title track, which serves as a perfect summary of the whole project. With this song and this release, the bands have conveyed that punk rock knows no boundaries. It shows that punk can tear down barriers to unite and build meaningful communities. And though it’s possible that some of the original intent could be lost in translation, both bands have retained the passion and emotion that makes these songs great.

Note: The Russian release will include all 7 songs on LP and digital, released on April 20. The US version will be released this summer as a 4-song 7 -inch.

King Tuff: The Other

Hop Along: Bark Your Head Off, Dog