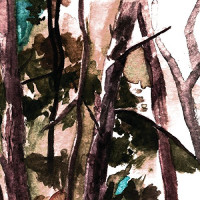 There’s a lyric in Bark Your Head Off, Dog that’s been a focal point in the coverage of Hop Along’s new album; “strange to be shaped by such strange men.” It’s a lyric that’s repeated throughout the album and has given me pause on writing this review. This album is filled with empowerment and discovery. It’s confident, outward facing, and with observations of deeply honest truths at the intersection of when the personal becomes the political. To construct an opinion that may shape someone’s perception of the album as an amateur critic, music consumer, and a strange man seems at odds with what this album represents.

Bark Your Head Off, Dog is an indictment of the world around us, of a world shaped and reflected through men’s eyes, but it’s more than that because it’s not just a reaction to this system. It’s an empathetic exploration and condemnation of it and the way it has so damningly hurt our collective writ large. One of the lyrics in the opener gets at this with Frances Quinlan singing “don’t worry / we will both find out / just not together.” The lyric works both in the context of someone finding new life after a break up and as an observation of what the world could be if shaped more equally. The album uses similar constructs throughout. “Not Abel” cleverly lays out a biblical metaphor noting the punishment for Cain, who murdered Abel out of jealousy, was to continue on in life shaping the world. “One That Suits Me” touches on how society explains away behavior of men through a myriad of different excuses in the context of the potential destruction of earth.

Aside from the meta, Bark Your Head Off, Dog is also an excellent indie-pop album that builds on the foundation of Hop Along while exploring new sonic territory. From the opening acoustic strums on “How Simple” to the understated acoustic downstrokes that pepper closer “Prior Things”, this is an album’s album. It is best listened to from front to back and warrants multiple listens to unfurl the subtle layers in these songs. You will find efficient utilization of different instrumentation - strings, bells, whistles, and subtle electronics mixed into the core foundation of the band. Hop Along explore much new territory while still remaining true to where they’ve been. There are psychedelic moments in “What The Writer Meant” and a dancy vibe to “The Fox in Motion.” All of the colors have enough room to breathe allowing the extra layers the space to not crowd out the songs. The interplay of the band has never been stronger and more in sync.

Hop Along’s Bark Your Head Off, Dog is one of the rare albums that lives up to the hype received. Don’t take these strange music critics’ opinions for it though, shape your own experience with the album. There’s much to unpack here and you’re likely to find the meaning in it meant for you because of the thoughtful universality with which it was written.

Useless ID/Tarakany!: Among Other Zeros and Ones