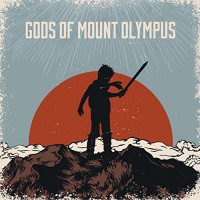 Gods of Mount Olympus are an interesting new project from Scorpios member Brian Wahlstrom. The band also features members of Unwritten Law and Matt Riddle from No Use For A Name. This self-titled EP is an interesting collaboration of punk rock veteran style with a piano driven rock and roll twist.

Gods of Mount Olympus are driven by Wahlstrom’s intricate piano work and strong vocal melodies that the band themselves describe as similar to “Billy Joel on speed”. The band has more of a punk rock feel than a straight up rock and roll sound, but the description does still ring true. The speed of the music and the pop sensibilities of the chorus pull the sound more into a punk rock and pop punk direction, but the nod to piano driven rock from the 1970’s and 80’s is undeniable.

The sound of the band is somewhat original in the current punk rock landscape. The piano steps up to replace guitar driven lead work, and Wahlstrom’s vocals match nicely with the music. The chorus lines are memorable and catchy and the music itself is played with a confident expertise that can only come from experience.

While I would be hesitant to say the band pushes itself outside of the typical punk rock mold, the sound is distinct enough for most punk rock fans to take note. It combines the melodic and clean elements of the Scorpios, and other various acoustic side projects and the live aggression of bands ranging from Lagwagon, and Bad Astronaut, to No Use For A Name. The song “Cops on Saint Andrews” is a great example of the bands many influences working together to produce a well rounded and memorable punk rock crooner of a song.

Gods of Mount Olympus almost flew under my radar with their most recent self-titled release. As a fan of the Scorpios music getting into Gods of Mount Olympus was not much of a challenge, but if I had gone into the record cold, the band would have won me over regardless. If you are looking for the comfortable feel of your favorite punk rock bands delivered in a neat and piano driven package, I strongly suggest giving this record a shot.