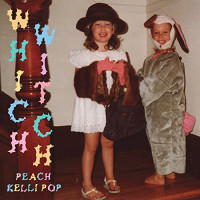 Allie Hanlon, the prolific innovator and multi-instrumentalist behind garage pop project Peach Kelli Pop, has nailed a signature formula that is proven to be even more airtight with the Record Store Day exclusive release Which Witch. A handful of songs spanning less than seven sunny minutes, the new EP is crisp, rippling with kinetic energy, and purposeful in its brevity. Though Hanlon has been based in LA for the last several years, she reconnected with her Canadian origins for the creation of Which Witch, recording the collection in her hometown of Ottawa.

Peach Kelli Pop has functioned more or less the same way for nearly a decade: Hanlon writes and plays every part, and then performs them live with a full band. With the project’s latest release, however, Hanlon is at her usual forefront post in a noticeably more commanding and assured fashion. While reverb and fuzz have been historically integral to Peach Kelli Pop’s lo-fi sound, Hanlon’s silvery vocals ring out through the tonal layering on this EP with an infectious clarity and a biting edge.

“Pitch Black” is the record’s charmingly sleepy opener, reminiscent of Vivian Girls and Seapony with its surfy, bouncing rhythm and sprightly bassline. Words like “decompress”, “rest”, and “stressed” allude to themes of self-consciousness and insecurity that populate the EP despite its outwardly dreamy and romantic appeal. Upbeat and melodious “Shine” follows closely after, featuring the tragically optimistic line “Out in the pouring rain, I hope to see you shine again” that finds some semblance of a resolution after a pithy 48 seconds. The aggressive and distorted landscape of “Rocky Mountains” marks a precipitous turn on the record, full of dissonant noise and atmospheric howls from Hanlon that are subtle but effective.

Garage rocker “Los Angeles” features Peach Kelli Pop’s characteristic energy and sharp power chords, but concludes in a fun twist with a cloud-opening, slow-motion swirl of instrumentation marked by Hanlon’s airy rumination “You can do whatever you want / but you’re all alone”. “Crooked & Crazy” is impossible not to bop along to, jangly and singsongy with a pleasant high-register chorus à la The B-52’s. The EP closes on a tranquil note with “Drug Store’s Symbol of Happiness”, a hazy and alluring reflection on the verisimilitude of being instantly attracted to another person.

Which Witch is a sampling of Peach Kelli Pop’s unspoken depth. Their poppy music is ofttimes stuffed into the “bright and cheery” twee box, but those associations are naively surface-level. Allie Hanlon has offered listeners an intimate peek at the band’s darker emotional underbelly, tackling issues like isolation and vulnerability in this curtailed but dynamic EP.