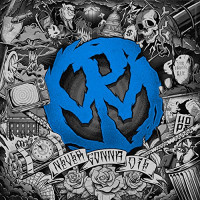 As with many of the punk rock elders in their mid 30s, my 1990s punk rock upbringing was largely informed by the first few Punk O Rama and Fat Wreck Chords collections. Of the many classic bands that graced those CDs, two bands have really stuck with me throughout all my phases: Pennywise and NOFX. While the later has continued to intrigue me with their distinct musical progression over the years, the former has always impressed me for staying true to its guns.

Their first four records are pretty much the gold standard when it comes to fast, politicized skate punk rock with some West Coast hardcore bite. Later on they implemented a few variations to the formula, but things start getting a bit hazy. “All of Nothing”, the record with Zoli Teglas on vocals, came at just the right time, with his performance introducing some of Ignite’s youthful dynamism and vocal range to the mix.

Personally I wasn’t too thrilled about Jim Lindberg’s other projects outside of Pennywise and have been a bit skeptical about return to the band, especially since his comeback record “Yesterdays” didn’t really strike a chord with me. I understand that the record was mostly re-recorded material, but it did not really pack the punch I expected to really draw me in. It seemed a bit forced and uninspired, giving me the impression that it would be better to call it quits, rather than carry on.

This new record, however, is a whole different matter and has largely restored my faith. The album kicks off with “Never Gonna Die” which brings to mind some of the finer moments on “About Time” or “Unknown Road”. From then on things build on that early Pennywise brand of fast beats and driving guitars that everyone has grown to love (or hate). Lyrically they are on top form, with many of the songs alternating between overcoming personal struggles (such as on “Keep Moving On”, “Live While You Can” and “She Said”) and more socially conscious and aware themes, as on “Can’t Be Ignored” “A Little Hope” and “Can’t Save You Now”.

One can accuse Pennywise of being formulaic and not really treading any new ground, but it takes a bit of talent to keep things exciting and powerful after about 30 years. “Never Gonna Die” may not bring many new fans or change anyone’s perception of them, but it stands toe to toe with a lot of their earlier, stronger and classic material. More importantly though, it demonstrates that they are as comfortable as ever in their skin and maintain their passion and drive in writing superb fast-paced punk rock.