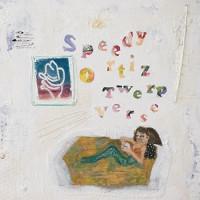 Speedy Ortiz’s third album Twerp Verse was preceded by advance track “Lucky 88,” an exercise in pop integration into the band’s sour guitar fuzz that finds leader Sadie Dupuis reflecting that “Life is carnage / I once was lost / but now I’m floundered.” In 2016, Dupuis scratched her pop itch with her Sad13 side project, reveling in off-kilter pop. However, Twerp Verse is thankfully not a major departure in line with After Laughter but finds the band integrating new twists into their sardonic indie crunch. Lead track “Buck Me Off” begins with Dupuis darkly considering “The year of the weird / bookended by booty pics I never posted.” The song is anchored by a plodding bass as Dupuis and new guitarist Andy Molholt send jagged guitar lines in each other’s direction.

Twerp Verse was produced by Bright Eyes alum Mike Mogis and was the band’s second attempt at a new record after sessions for the initial offering were scrapped. In describing the album’s unique moniker, Dupuis labels a “twerp verse” “when a musician guests on a track and says something totally outlandish…[that] becomes the most crucial part [of the song].” She states that this album is the band “stand[ing] up and show[ing our] teeth.” Lyrically, the album recalls Liz Phair’s decimation of her male peers on Exile in Guyville updated for the dating app generation (similar to Camp Cope’s album How to Socialise and while Cope’s album sonically recalled Phair, Speedy’s new album still maintains that Polvo – Archers of Loaf fetish).

Similar to “Lucky 88,” the music on “You Hate the Title” adds some 80s dayglo to the band’s Slanted and Enchanted sound with cowbells and synth lines. The three music videos that preceded the album’s release do seem to share a color palette with Paramore’s most recent aesthetic. However, for the most part at least sonically, Twerp Verse doesn’t abandon the Archers seasick guitars and finds Dupuis’s razor wit and wordplay as sharp as ever. However, Dupuis’s wandering riffs aren’t as often accompanied by the dynamic chorus explosions of Major Arcana, and lyrically, the album moves into the perils of romantic entanglements in the age of Tinder and instant gratification. It appears all this convenience overload leads to stifling solipsism, as Dupuis eviscerates her would-be lover in “Lean in When I Suffer” as “[caring] a lot, we’re strictly speaking self-care.”

“Villain” is the most acute of Dupuis’ reckonings with the shortcomings of the opposite gender. Focusing her attention on an unwanted interested other who rides her bus and attempts to win her attention with assumed familiarity, she dissects the male ego’s persistent belief that it has the right to the attentions of any female it deems worthy. It also lambasts the “catch some and infect some” predatory aspects of the new millennium dating scene, as Dupuis’s adversary wonders “what kind of games you like,” and she realizes that “he looks past my answer / did he earn the right / no way.”

Overall, Twerp Verse maintains Speedy Ortiz’s updated take on the deranged side of Merge Records and also manages to brighten the songs with some pop music concessions. It also marks the lyrical maturation of Dupuis as her undiluted lyrical gymnastics tackle the traps and snares of the female single life.

Rolo Tomassi: Time Will Die And Love Will Bury It