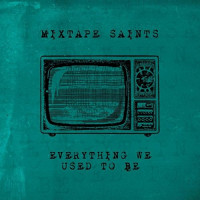 Mixtape Saints sit on the threshold somewhere between The Gaslight Anthem and The Menzingers. They create beautiful melodies like Gaslight while properly using the heaviness of Menzingers into their hooks. Everything We Used To Be is a properly titled retrospect of the band so far and it does a good job of compiling the band's career so far. The compilation showcases three previous releases from the band that include a full band EP, an acoustic EP, their newest single from last year, and a new song.

Mixtape Saints can be a lot of things. They can be dancey, they can be emotional, and they can be heavy. It’s a great combination that comes across in their music on its own or all at once. “Sleep” is a great example of a jumpy punk rock song that has a Smiths esque tone to it. It’s hard not to hear the major influences in the band but they definitely add their own elements to their music. The band is described as punk rock soul and in many ways, they pull it off.

I previously reviewed the band’s acoustic EP that’s featured on this compilation. Although not on purpose, Mixtape Saints does a great job acting as both an acoustic and electric act. “Spare Change” is extremely catchy and is an energetic song that incorporates a kick drum and an acoustic guitar as its main elements. It truly is in an intricate song that grabs your attention to the Saints as an acoustic act. Both the acoustic and electric versions of “Heartbreak Radio, Cars, and Rain” offer something different, which is cool to hear them back to back as you can truly feel different things depending on which one you listen to. It’s this kind of versatility that creates a surprising element to the band that you never know what you’re going to get.

“Bright Lights/Burned Out” is definitely a favorite song of mine that I hope to get an electric version of in the future. The newest song, “Reckless” has a driven bass tone that allows the lead guitar to do whatever it wants. It’s a promising song a la Beach Slang that shows that Mixtape Saints have only just begun.

While the band seems to rely heavily on their influences, Mixtape Saints has a sound that is still being perfected. Each song is a promise to the tune of the band’s originality and with each release, there is definitely a special sort of element. The band allows you to really feel the emotions in the vocals as well as the music. The world will definitely be looking forward to a full length from the band and this retrospect is the perfect way to hold fans over.