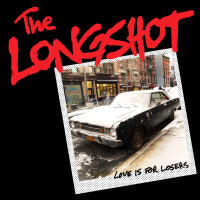 By this point, you’ve probably made up your mind about Billie Joe Armstrong. Since the early nineties, he has been a fixture in the punk rock scene. Whether it was Dookie, Nimrod, or American Idiot, chances are Green Day were one of the on-ramps for your introduction to the music as well. The chord changes and guitar leads, the familiar faux-British snarl, and soaring melodies are all pretty familiar at this point. The sound is distinctly Billie Joe Armstrong. Much of what you think about his previous output, either in Green Day or through a handful of side projects along the way, is going to conform your opinion about his new band The Longshot.

With only a few weeks in the public consciousness, The Longshot already compiled a smattering of releases. This includes their debut LP Love Is For Losers. The Longshot, comprised of David Field, Kevin Preston, and Jeff Matika at their recent live debut, are hard to approach as a new band because the sound is very familiar. Love Is For Losers sounds like a mix of Nimrod and Warning-era Green Day with a healthy dose of traditional rock ‘n’ roll underscoring it. It’s a pretty straight forward pop-rock record that is equal parts Cheap Trick as it is The Ramones.

“The Last Time” opens up the album with a 50s sway and verses punctuated by handclaps. It is one of the catchiest songs on the album and is good starting point for the following 10 tracks. “Taxi Driver” and “Chasing A Ghost” follow, which along with “Love Is for Losers” were on the preceding eponymous EP The Longshot put out to tease this full length. “Cult Hero” speaks to the desire of wanting to be unknown except among the people who are cool enough to be in the know. “Happiness” is a more pop than punk bouncy ode to what truly is contentment. “Turn Me Loose” is a mid-tempo rocker about wanting to breakout, even if that breakout is in the body of a middle-aged adult covered in dumb tattoos. There’s a reflection seen in these songs that speaks to the tumultuous last handful of years in the Green Day story arc and a lightness that underlines the fun moments throughout Love Is For Losers.

There’s a Green Day story out there that in between recording Warning and American Idiot, a full album of material was recorded and stolen. Love Is For Losers feels like it could be that missing link. If you’re longing for a time before the theatric rock ‘n’ roll arena shows and didn’t mind the direction they were going in at the start of the century, this is likely an album for you.