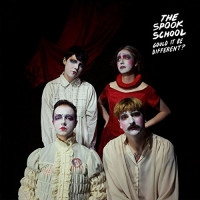 “Fuck you I am still alive!” sings Nye Todd during the first big hook on The Spook School’s new album. The line, direct and cathartic, acts as a perfect introduction to Could It Be Different? Three albums in, The Spook School maintain their flare for melancholy indie pop.

Following Dress Up and Try To Be Hopeful, The Spook School continue with familiar topics: gender, sexuality, hope, depression. The topics keep coming back because, well, they never go away. This time though, returning producer Matthew Johnson of Hookworms adds a new layer of sparkly sheen that somehow makes the songs even catchier. This benefits lines like, “It’s been a bad year and I don’t think it’s getting any better anytime soon." (The harmonizing of “It’s been a bad year,” doesn’t hurt either.) Nye Todd, who came out as transgender a few years ago, delivers blunt, honest lyrics that are massively encompassing. Especially on the final two tracks, "Body" and "High School," with the latter only held down slightly by too on-the-nose clichés. Still, even with no regrets, Nye finds himself looking back.

The Scottish band is often reminiscent Los Campesinos! in both sound and demeanor. The attitude isn’t outwardly positive but doesn’t reek of negativity either. “Teenage hopes are never less than perfect anyway,” Anna Cory sings on one of her three fronted tracks. There’s nary a song on Could It Be Different? that doesn’t resonate.

The Spook School hit the somber dance-friendly indie on the head. Could It Be Different? is an album that’s already putting them in different circles. The band excels at its beautiful, earnest approach—something fans always respond to and appreciate.

Cancer Bats: The Spark That Moves