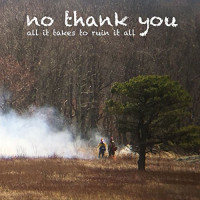 One of the most powerful moments in No Thank You’s All It Takes To Ruin You is a recording of a voicemail from lead singer Kaytee Della Monica’s late father opening up “Veranda”. It’s the type of voicemail many have had from a parent that we often take for granted with them calling just to check in and say hi. It sets the stage for this album in dealing with the grief following the loss of her father and life as an adrift 20-something. It makes the closing lyrics “I’m planting violets for you” all the more meaningful in understanding that sometimes moving on is more about making peace with the space between you and what you’re struggling with.

All It Takes To Ruin You, No Thank You’s second release for Lame-O Records is an improvement upon their debut Jump Ship. It’s rounded out with fuller sounds combining elements of emo, indie rock, and moments of post-hardcore inspired guitar work creating short blasts of songs that rarely make it past the two minute marker. At times, No Thank You are reminiscent of fellow Philadelphians Cayetana mixed in with a bit of Frankie Cosmos. Some of the instrumentation rounded out by Even Bernard and Nick Holdrof finds inspiration from early material from The Get Up Kids.

The standout track is “New England Patriots” giving the listener the full spectrum of No Thank You, from the breathy vocals to the crashing guitars that close it out. It has Della Monica singing “there’s a constant reminder / in every song / and I can still hear you humming along / always certain to get the lyrics wrong” highlighting her unpretentious presentation of the everyday moments that have larger meaning on reflection. “Hell Bent” plods along at a slower pace with Della Monica wondering if her relationships are “heaven sent or hell bent.” “Outdoor Cat” features lighter pop-punk fare and a clever metaphor using the personality traits of an outdoor cat in the context of relationship foundations.

All It Takes To Ruin You is album fitting of its April release date. It’s not as dreadfully dreary as the ending days of winter, but lacks the positivity of the first days of spring. It demonstrates No Thank You have the potential to stand out and with only a year between this and their last release, shows how fast they are finding their sound.