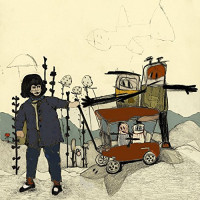 A band possessing an effortless ability to capture both ornateness and minimalism in their music, Los Angeles-born Girlpool successfully affixes new layering and tone color to their lo-fi art in Powerplant, their sophomore full-length. Harmony Tividad and Cleo Tucker, the ambitious pair behind Girlpool, have now introduced drums with this record, performed by Miles Wintner, producing a more fleshed-out group sound than previously exhibited in their debut LP Before the World Was Big (2015) and self-titled EP (2014). Even with the additional instrumentation, however, Girlpool continues to wield the special rawness and harmonic inventiveness that has characterized their sound since the start of their career.

Powerplant launches with the record’s lead single “123”, a reflective ballad turned shouty anthem that shows off Tucker and Tividad’s vocal range, as well as a dope introductory drumroll. As they demonstrated on their first LP, the duo can sing with a whisper-like quality without sacrificing impact, and at the drop of a hat emit the high-pitched, horror movie screams showcased on their self-titled. “Sleepless”, the second track off Powerplant, is driven by a series of Tucker’s signature guitar melismas and harmonics. Tividad’s bassline is the spinal column of the song, backing the transition of the vocal melody throughout and busting through the wall of fuzz that encompasses the chorus.

Many of the lyrics on Powerplant feature themes of observation and consideration, naive in tone, with idiosyncratic detail that demands recognition. In “Corner Store” the duo recount “I get stuck on the things I see, I’ve had crumbs in a bag in my pocket all week” with the assuredness of someone for whom this is an everyday experience. The final verse of “Your Heart”, a vocal-heavy deep cut, describes a domestic scene featuring a kitchen sink and countertop. In “Soup”, a shoegazing treasure reminiscent of Waxahatchee’s droning “American Weekend”, Tucker and Tividad wonder with existential potency “Why are you so stuck, kid? Look up from the ground.”

Laced with patches of dissonance and sudden bursts of sound, Powerplant marks an experimental milestone for Girlpool that beg to be more fully explored. These sonic treats speckle the record but stop short, teasing listeners with promises of heavier, potentially aggressive tracks. “Corner Store”, “She Goes By”, and album closer “Static Somewhere” are particular bangers that flaunt noisy feedback and dissonant riffs, paralleling the innovation of significant alt groups like Veruca Salt or Speedy Ortiz.

What comprises the core of Girlpool and encapsulates the heart of the band are Tividad and Tucker’s surreal and innate understanding of one another. The music they create is a transference established between the two of them, a communication that can range from distinctive vocal harmonies to purposeful instrumental counterpoint. Not one tone, dramatic pause, or arbitrary tempo shift is superfluous, and though the sometimes strident timbre of their voices may prove a deterrent to more casual listeners, it is an indisputable truth that Girlpool’s musical language takes on telepathic proportions.

No Thank You: All It Takes To Ruin You