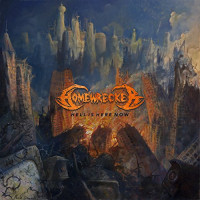 After a decade together, Ohio-based metal/hardcore act Homewrecker return with their third full length, Hell Is Here Now.

Opening with a rather typically ‘metal’ ominous soundscape, “Burden Of Self” starts things off with a mark making, albeit brief, dissertation on being ones own worst enemy. The following “One With Torment” builds on the same theme of personal suffering, while adding some wisely used time and texture. Droning doom leads into bouts of shout-out thrash and back again.

After the leadoff single “Bound By Validation”, a bouncy powerviolence juggernaut, “Fade To Oblivion” opens with a jarring series of instrumentals. From a speedy double kick to a mellow solo guitar, here these guys start to really showcase their knack for relying on instrumentals more so than vocals.

Indeed, most tracks here are about one-third instrumental intro, never sticking with the same theme. They swiftly change up the tempo, the style, and the volume, all within the same 60 seconds or so. These microbursts of creative outlet may sound too eclectic to make sense to some. But in a genre such as metal where so often bands worry that changing things up once in a while will diminish their cred, it’s very well deserved; both to the listeners and the genre.

The halftime twins “Buried In Suffering” and “Land of the Damned” offer splashes of classic, tightly wound thrash, with their rapid fire drums and hard riffs, and the best showcasing of the dueling vocalists on the whole record. Both gents are faithfully glued to the kick with neck breaking precision.

“Growing From Nothing” is another opportunity for the bellows and shouts to shine, this time over a notably more somber and mellow atmosphere. As with the rest of the record, the dropoffs and momentary silences do not dilute any of the power here. In fact, the suspension effectively builds brief hints of respite, increasing the impact of the increased energy and blood curdling anger later.

“Perpetrators” wraps up the record on a strong note. After spending the majority of the track as a classically hardcore song, it then spends about a minute and a half gently curving downward, until we are left with a distant solo guitar in the wind. It’s a very well executed bookend.

As they implement dashes of classic Sabbath and Slayer to their hardcore foundation, Homewrecker’s faithfulness to the structure of a complete album is the benchmark here. In a world where fewer bands are releasing full lengths, and doing so less often, Homewrecker makes this one count.

Benny and the No-Goods: Fistful of Dullards