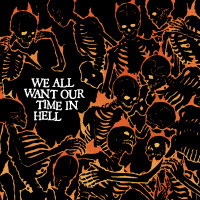 To most people, Samhain is just the weird band between the iconic horror punk of the Misfits and the evil blues metal of Danzig. Samhain is certainly the least appreciated of Glenn Danzig’s musical children. That’s probably why they’re so adored by his hardcore fans. Plus, you just can’t get from the Misfits to Danzig without Samhain. They are the missing link. They are a mystery that’s still being unraveled 30 years after they originally called it a day.

Shawn Knight is the perfect person to curate a Samhain tribute. There are few people who understand weird as well as the Detroit musician. A quick listen to his long running band Child Bite will confirm it. He understands that it takes more than heaviness to do these songs justice. He manages to draw from an impressive pool of strange bands. The only common thread is their ability to reinterpret the abstract while maintaining the spirit of the original songs. .

Joel Grind opens the collection with the instrumental “Night Chill”, which also happens to open the Final Descent (1990) LP. Like the original, it’s more atmospheric than heavy. It certainly manages to set the tone. (A proper Toxic Holocaust song with vocals would have been amazing, but this will have to suffice.) Retro thrashers Midnight are up next with “Mother of Mercy” from November Coming Fire (1986). It’s a chaotic but relatively straightforward take on the song whose lyrics give We All Want Our Time In Hell its title.

Nil Eye amps up the weird with their vocal effect on “In My Grip”. Ringworm puts a hardcore spin on “Black Dream” from Initium (1984). Gore metal kings Macabre sound truly menacing on “Ghoul”. Acid Witch makes “Halloween ll” extra scary. Multicult put an interesting spin on “The Howl”. Like Rats does the same with “The Shift”. Shed the Skin does the music for “Kiss of Steel” justice, but they miss the mark with the snorted, death metal vocals. (Say what you will about GD, but the dude could sing.)

Immortal Bird is the only band included featuring a female singer. They take on “I Am Misery”, the sole song representing Unholy Passion (1985). Child Bite turns in a memorable version of “Unbridled”. Brain Tentacles twist “Human Pony Girl” into something both beautiful and hideous. Ritual Howls complete the collection with a cold wave interpretation of Samhain’s catchiest song, “Archangel”. They give it a harsh Swans or Sisters of Mercy feel.

None of the bands on We All Want Our Time In Hell are household names, and that’s the way it should be. (No one wants a Samhain tribute album curated by Guy Fieri featuring Shinedown, Breaking Benjamin and Five Finger Death Punch.) All the bands turn in inspired performances. They respect the original songs enough to not try to copy them too closely. There is never going to be any new Samhain music. This might just be the next best thing.

*We All Want Our Time In Hell is available in three colors (orange, brown, white, 100 of each) of very limited edition vinyl. If you want a physical copy, you'd better not sleep on it.