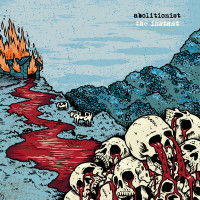 Recorded over a period of five days, Abolitionist come out swingin’ on their 4th album The Instant, which takes the listener on an adventure through a dystopian storyline that examines our tendency to conform with the rest of society. After various lineup changes over the past few years, the band has ultimately settled on the current lineup of Dustin Herron on vocals/guitar, Jeremy Dunlap on lead guitar, Joseph Mohler on bass/vocals and Sean Rule on drums to record an album that draws from a variety of hardcore and punk influences (maybe Dillinger Four?, maybe Propagandhi?).

The overall theme of the album definitely invokes a feeling of urgency right out of the gates. The title track starts off the album with a muted guitar progression while the snare crescendo introduces a bleak, yet loud, outlook of the future. While the band uses musical stylings that sound somewhat familiar throughout this 12-track affair, the vocal technique is moderately unique in reference to how it is paired with the music. In other words, a lot of the guitar licks utilize loads of melody, while there is very little melody in the singing. This isn’t necessarily a bad thing because it seems to work well, especially with the accompaniment of gang vocals on many of the tracks. There are times though where I expected to hear a little more inflection in the vocals because of the music, but that never really happens. But in the end, this is Abolitionist’s formula and their sticking to it.

Albums like The Instant are very necessary in times like this. While this is an all-encompassing negative look on modern times (the cover art is a pretty good example of this), it’s nice to know people still care enough to make this much noise.

The Lillingtons/MakeWar: Live in Grand Rapids