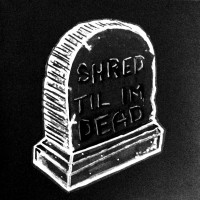 Early this year, mysterious packages of black bubble wrap that only had Cave Witch written on them began showing up at various businesses, music clubs, and on people’s door steps throughout Dayton. Inside, there was a single CD and an insert indicating the release was titled Shred ‘TIl I’m Dead Vol. 1, other than that no information was given. Almost a month later, nobody knows anything else about the band. There have been no shows, and nobody has taken credit for the release. Personally, I enjoy the mystery and hope it lasts.


It’s some of the best marketing I’ve seen in the local scene, because who doesn’t love a mystery? The thing is, marketing doesn’t matter if the music doesn’t back it up. Luckily, I was able to get my hands on the music about a week after it came out and listened to both of the songs on it multiple times since them.

Starting with a single scream, “Growing Pains” features a guitar riff full of swagger and vocals that sound like they were recorded through a cheap megaphone. This works perfectly with the bare bones garage feel of the song, as the only other instruments on the track are drums and some sparse piano. It all comes together to give the feel of Sebadoh, Pavement, and something of the earlier recordings by Dayton hometown heroes Guided By Voices.

The second and final track, “Fingers” starts off with a completely different approach with synthesizer and strings. The vocals have a spacey feel, which works well with the slower tempo and acoustic guitars on this song. The variations between these two songs lead me to believe that while Cave Witch may have some core members, it may be more of a collective of musicians than what would constitute a traditional band.

On the final track, the singer says “it’s been quiet for too long.” And don’t get me wrong, my hometown has a great music scene full of great bands. But, nobody has talked about a band like this in quite some time. It’s cool to see a band get an entire city talking, whether their thoughts on the band are positive or negative. For me, this is a great single that brings to mind several different elements of the best elements of early 90’s indie rock, mainly the utter disregard for anything having to fit within expectation of what a genre should sound like.