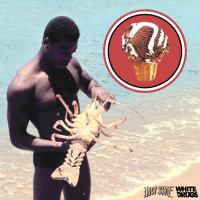 It has been over a decade since Wichita Recordings released The Drips’ self-titled full-length. The band was a side project of members of The Bronx that also included members of The Distillers and Suicidal Tendencies. And while the band was not terribly active during the years that the members were originally together, they did get back together for some shows several years ago. For 2018, Riot Style has reissued The Drips’ only studio album so that punk rock fans can discover or re-discover this short-lived project.

For those of you who have not heard The Drips yet, the album features wild songs like “Fountains” and “Old Sex.” More on the anthemic side, “Fountains” is a really great example of all of the members’ influences from their other projects come together. In this song (throughout the album) lead vocalist Matt Caughthran’s scratchy and high-pitched singing is front and center while the jangly guitars and light gang vocals provide a bit of a deeper counter balance. “Triplets” is a much more rowdy song. Somehow Caughthran’s get even louder, almost to the where you think he could blow out his voice. The track stands out from the other ten, not only because it is the shortest coming at just over a minute long, but also for its brief bass breakdown that is eventually mimicked by the guitar. Once that part ends the whole bands explodes into one last chorus for a big outro

What makes this specific reissue of interest is that this is the first time that The Drips has been pressed onto vinyl, which used the tapes from the original recording of the album. Apparently the CD version features outtakes from original sessions as well.

Fans of any of the members’ other bands could do worse than to check this reissue out, but The Bronx fans especially should jump on this release if they haven’t gotten around to listening to The Drips yet.