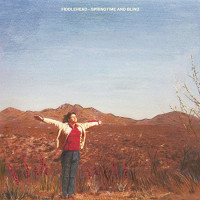 Massachusetts’s Fiddlehead are one of Run for Cover’s newest signings, and their new album, Springtime and Blind, is actually a co-release with long-standing Boston hardcore label Lockin’ Out. The band harnesses a melodic and ambient indie rock sound that is neither contrived nor plagiaristic. In fact, one of the most refreshing aspects of Springtime and Blind is its sense of candor and modesty.

The sound cultivated on this LP draws from a garage-rock atmosphere that is tempered against song writers who’ve understood the more aggressive aspects of music. The guitar sound is in no way as confrontational as the distortion found in heavier punk bands, but the riffs themselves do have elements of that genre. With the cleaner guitar sound comes a more full-bodied ambient vibe that straddles the line between, say, Mogwai and the more straightforward indie rock of Manchester Orchestra.

“Rejoice,” the record’s sixth track, is exemplary here. The vocals offer an austere repetition that plays more as another instrument in the song overall. A similar approach is taken on “4/17/70” in which the music is laid behind a recording from a family member, with no vocals whatsoever. What makes the song remarkable though, is that the recording accents the music perfectly. The music in both songs is atmospheric but not without structure, a balance that Fiddlehead has done very well in maintaining throughout the record as whole.

Much of the content on the LP seems to deal with loss and grief, particular to the father and mother figure. The record’s opening song, “Spousal Loss,” has singer Pat Flynn exploring the ways in which his mother coped with the death of his father. The music is a perfect complement to the lamentations offered in Flynn’s lyrics. The songwriting is terrific all around here as the track as a whole develops a brooding reflective mood. Similarly, “Poem You” seems to offer a reflection on the grief that accompanies great loss. Here, Flynn tackles loss from his own perspective and he does so with great tact and subtlety. The song’s lyrics could read as a literary poem as much as they do the lyrics to the song itself. It should also be noted that Flynn has really showed great plasticity as a vocalist with Fiddlehead. Measured against his vocal stylings in Have Heart and Free, Flynn shows his ability to hit notes, adapt his cadences, and draw on melodies with great precision.

What Fiddlehead offer on Springtime and Blind is a deftly crafted full-length of moody indie-rock with no pretense or grandeur. The record plays extremely well as whole and the songs themselves, while maintaining a similar structure, stand strong on their own. This is a mature release from veteran musicians. And this comes with little surprise. Pat Flynn and Shaun Costa from Have Heart consistently make great music. With Fiddlehead, they’ve joined up with some of the guys from Basement to craft a release that is apart from their typical sound and they’ve done so with great success.

Life in Vacuum: All You Can Quit