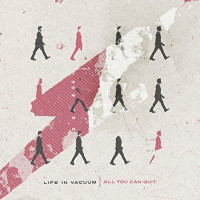 Toronto's Life in Vacuum can best be described as lightning in a bottle. One that, in the realm of post-hardcore and screamo, simply cannot be corked. First off, if you love bands like At The Drive-In, Drive Like Jehu and Refused, well mix 'em all together and this is what you'll get. I didn't think they'd be able to top their last record 5...  but All You Can Quit certainly comes just as close with a narrative that's just as disorderly and just as cathartic.

There are a lot of words I can use to paint LIV's picture -- relentless, fierce, incessant -- and truth be told, they'd all be right. But what I love about AYCQ is that it channels their aggression beautifully into a canvas of chaos -- and it has a more direct, organized feel to it. Songs like "Jazz" and "Apartment" pick right up from the last record but this time around, the band finds a way to slow things down slightly and balance their sound. "The Screaming Fish" is a prime example of this, as well as "Sinker" which feels like fellow Canadians Single Mothers cut loose once more. Slow but still angry. Tempered but still filled with energy.

This allows LIV to work with even more catchy hooks, embedding them in boisterous guitars and jagged riffs like never before. So much so, that for as loud and big as they sound, everything's much more intricate. In short, if you miss California's screamo kings Comadre and are into the spinoff band called Everybody Row, then you're gonna want to jump in on this.

Now, for fans of old, just let me note that the musicianship off 5 was already damn good but here, it's blended so much better with Sasha Chornyy's vocals that you can tell the band wanted something rougher and filled with more liberation. And that manifests in a record that flows more freely and loosely. Then again, this is the kind of fluidity and venom that I've come to expect from the guys. Once more, LIV script a masterpiece and one I hope people don't sleep on.