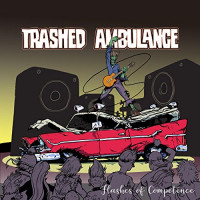 Trashed Ambulance is a 3 piece pop punk band hailing from Alberta, Canada, in their 4th year of existence, releasing their new LP entitled “Flashes of Competence”. The band was clearly raised on the mid 90’s Epitaph and Fat Wreck roster, albeit with better production. Vocalist Josh even sounds exactly like late 80’s early 90’s Fat Mike. While that isn’t totally a bad thing, his vocal style and range certainly isn’t going to be for everyone. That being said, it certainly flashes back to those simpler times. Opening song “Ambulance” opens with a sound clip and gets right into that familiar double time snot punk territory. “Bridesmaids” has an opening riff that calls back to Cheshire Cat style Blink 182, with a verse and chorus that sounds like Donuts N Glory (Remember them?!!).

Halfway through the album, “Dogs Chase Cars” comes in with guitar riffs that sound like they came from Pulley’s self-titled album. The track is my favorite on the album, and for good reasons. It’s fast, its catchy, and it sounds like everything good about the era of music I hold near and dear to my heart. “Creeps” has a fairly good Rancid vibe to it, with the bass taking the forefront, and if you close your eyes and picture Tim singing it, the song could be right off the first Rancid album.

It is hard to listen to Trashed Ambulance without making those comparisons, because all of those above named bands come to mind when I hear the album. I also say these comparisons as a high form of flattery, because they absolutely nail the vibe and style they we’re going for in making this album. In a press release about the album, Josh even says of the record, “Flashes of Competence is a record any alcoholic punker stuck in the 90's can hang their hats on!” So to the boys, I say congrats, you have made a collection of 12 songs that may not stray too far from the path, but one I can put into rotation between “The Longest Line” and “Treatment 5”. The band will be touring, and the album comes out today, check it out!

Life in Vacuum: All You Can Quit