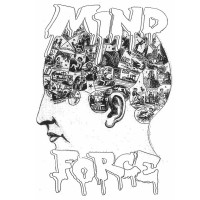 New York’s Mindforce are one of hardcore’s newer bands that have found themselves surrounded by a lot of excitement. That’s nothing new in a genre whose bands have short shelf-lives. But Mindforce seem to be living up to that hype with aplomb. They aren’t quite the utter replication of straight-edge youth crew nor are they representative of mosh-laden aggro-hardcore. Instead, Mindforce have cultivated a sound that combines late ‘80s metallic hardcore stylings with a more contemporary twist on some of the thoughtful bands from the early millennium like Have Heart. This particular Mindforce release is a demo-7” offered from Cointoss Records, and is a great introduction to the band.

The guitars on this seven-inch immediately stand out as they certainly cultivate a vibe that draws directly from A.J. Novello’s work in Leeway and Parris Mayhew’s writing in Cro-Mags. Similarly, the guitars on this recording straddle the line between frenetic heavy metal riffage and the more horse-hopping writing found in the straightforward hardcore style. The balance here creates a dynamic sound that is neither derivative nor totally avant-garde.

The vocals on this seven-inch are also impressive in that they manage to harness the aggression necessary to the hardcore genre, while also maintaining a sense of clarity. The listener can generally decipher the lyrical content without needing a lyric sheet. The layered recording of double vocal tracks helps to bring the vocals, and lyrics, to the front of every song on the seven-inch too. The vocals, overall, make for a much easier listening experience especially given the hardcore sound in the music.

“The Fulcrum” is the strongest track of the four songs offered. It manages to combine energetic metallic verses with a slowed down grooving mosh break, all in the matter of just about a minute. The vocal delivery is concise and on par with the song’s pace too. “The Gauntlet” is not far behind in strength either, and the guitar lead throughout offers an eerie depth to the music. Again, the vocals are impressively laid down showing an understanding of how placement and cadence can make a hardcore song sound much more dynamic. The drum and vocal bridge preceding the heavy breakdown bring both the song and the seven-inch to an impressive closure.

To be clear, this isn’t Mindforce’s only offering. They’ve since recorded and released a five-song EP, The Future Of… This demo seven-inch is worth buying as an introduction to Mindforce or as a complement to their newest EP. Frankly, Mindforce are an example of how hardcore music can maintain its niche while also offering a bit more to the listener. Mindforce have done a great job in mixing what’s come before them with what they have to offer themselves, and this is a strong first release by any account.