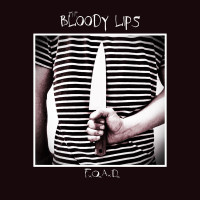 Larry Kole has been a fixture in the Grand Rapids, Michigan punk scene for well over twenty years. Whether or not he is in a band or making flyers for shows, he keeps his finger to the pulse of the scene. In the summer of 2014 Kole formed a band with his partner in crime Taylor Shupe, and a young commanding vocalist Tonia Broucek. They rounded out the line up by adding a Grand Rapids punk scene newbie, David Sparks behind the kit. They christened themselves The Lippies, and quickly began to gain a following all over Michigan, and most of the Midwest. In the spring of 2016 they released their self-titled full length via Red Scare Industries, and things began to take off. Press for the band was overwhelmingly positive, and for a time they were the talk of the punk community. It was starting to feel like they might just be the next big thing in the punk world, then the Tonia pulled the plug. Instead of sitting around moping, Kole and Taylor began to germinate the idea that would become The Bloody Lips.

The Bloody Lips came together through many nights of hanging out with their friends Josh and Krystal Stacey; a married couple that shares the love of punk just as much as the punk rock Laurel and Hardy do. They began writing songs that would make up their 2017 debut B-Side Noise and began playing shows all over Michigan, and the Midwest. The Bloody Lips sound is a complete 180 degree turn from what Kole and Taylor were doing in the Lippies. The pop-punk has taken a back seat to a more focused early 80’s hardcore attack. B-Side Noise was not only a kick in the teeth for fans of the Lippies, but for the punk community at large. Focused, harsh, and pissed The Bloody Lips were going to make sure you didn’t forget them.

The Bloody Lips didn’t leave much time for anyone to forget, because the beginning of 2018 saw the release of the five song EP, F.O.A.D. The EP is an even rawer, more aggressive version of The Bloody Lips than we heard from last year. As opposed to its full-length predecessor, F.O.A.D. seems rushed, sloppier, and less focused. The production on the EP feels loose and sounds more like a band in practice, rather than in a studio. That’s not to say the EP doesn’t have its shining moments. Its two hardcore inspired tracks, “Obedience” and the interestingly titled “Jesus Built My Twatrod”, are the type of immediate, gut-wrenching hardcore that fans of The Bloody Lips want to hear more of. The rhythm section of bassist Taylor Shupe and drummer Josh Stacey, is locked in and laying the ground for Kole’s razor sharp guitar. Krystal Stacey’s gruffly shouted and sometimes screamed vocals, ala Brody Dalle, smack the listener across the face with the hardest of open hands. The hardcore tracks on both last years full-length and this years EP, are where The Bloody Lips truly shine. The three other tracks on F.O.A.D. come off as what they are, b-side noise. Overall the EP sounds like a band that is still growing and working out the kinks on the way to creating something truly great.

It has been quite the whirlwind for The Bloody Lips since the end of The Lippies, and things seem to be speeding up for the band in an almost deja vu kind of way. It’s great that The Bloody Lips are confident enough to let us into their creative process, but sometimes it’s better to let things mature before you invite strangers in. While F.O.A.D. may not be the bands greatest effort thus far, this is a document that shows a band going, and growing in the right direction.