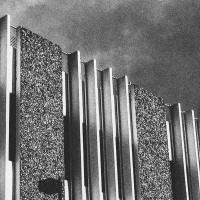 Ever feel beyond pissed about the current plane of existence? It’s that inescapable feeling when you’re actively seeking out the grey and doing your best to ignore any colors trying to seep through. I’m talking about the days where one wants to just fucking wallow embracing the discomfort that comes with it. Lace, a Houston band formed in 2016, an area that has seen its fair share of uncontrollable misery in that time period, have provided just the soundtrack. Their album Human Condition is a distorted mix of post-punk and hardcore leanings harnessing said misery.

Lace, in both aesthetics and sound, operates in a grey area. At times, it’s hard to pin down this album into one genre. They equally pull from the influences the individual players are bringing to the table. “Amnesia” kicks off Human Condition with a minute and a half banger that sounds like Converge if they were a straight up punk rock band. The song is despondent all the way through building up tension at the end before launching into the body of Human Condition. Tension is an apt word to describe what’s going on here and even a title of one of the songs. The song “Tension” leans more on their post-punk side with straining guitar riffs bending in and out of tune over lead singer Josh Bosarge chanting with more angst each time “with your back against the wall / you’ve found it all.” It’s a good description of where Lace are playing from.

For a new band and debut album, Human Condition is very well put together. While the spectrum of music is consistent in straddling the noisiness between post-punk and hardcore, Lace utilizes the individual dynamics on both ends of the spectrum well. On “Moral Trip,” the winding guitar lines are interspersed between short bars of blast beats. “Roman Candle” closes with angular and fuzzed out guitar lines that provide an uncomfortable contrast over double time drums adding to the aural stress. Moments like these are often utilized over repeated lyrics building up discordance to close out songs.

Sometimes the only way to escape the grey of human condition is to embrace it. Lace are a true believer in this philosophy. While you won’t find anything approaching catharsis on Human Condition, a surprisingly dark 24-minute jaunt, it just might be what you walk away with.