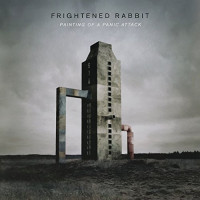 I didn't go back into Frightened Rabbit's discography in chronological order because, well, no matter what I threw on, I knew it'd be an album filled with emotional gut-punches. After the Recorded Songs EP I dug into Painting of a Panic Attack, and then it hit me why. When I first listened to it a couple years ago, it reminded me of my own bouts with depression and that's I quickly discarded it. It was too fuckin' soon and too fuckin' real. Listening to it now, and yeah... hindsight is a bitch... I'm in a better place personally to handle its content but sadly, I feel a bit ungrateful because of lead singer Scott Hutchison's death. And bear with me, this isn't me capitalizing or being opportunistic, this is me telling you all of Frightened Rabbit's music is for healing, and this record in particular should be something worn on our hearts at all times. And something that instills such fear in you can only be something draped with greatness.

This album marks a deviation from the folky/indie/rock music of norm, but still has the FR signature on it. And yes, that comes down a lot to Hutchison. After moving away from Leo Abrahams as a producer (who has worked with Brian Eno, Florence and the Machine, Imogen Heap; and on movies like Hunger and The Lovely Bones), I couldn't wait to hear Aaron Dessner (of The National) and the stamp he brings. And truth be told, it's refreshing and expansive, and something Hutchison needed. Painting of a Panic Attack is a step out the comfort (or in FR's case, the discomfort) zone, if not lyrically, musically. You've got edgy synth beats, waves of electronic drums yet songs that are melodic anthems and catchy singalongs -- "Get Out" and "Woke Up" for example.

Of course, they don't stray too far off their beaten path with the ethereal hums of "Still Want To Be Here", "400 Bones" and "A Lick of Paint" (if you're lucky enough to get the deluxe version) all throwing back to their old indie style. What makes this record stand out is that it really feels like a kindred spirit to their friends like Frank Turner, We Were Promised Jetpack and Manchester Orchestra. Most of all when you soak in the the vulnerable lyrics of fighting back depression, that's when Hutchison's struggles hit home so hard. It's like reading a suicide letter, especially with the titles of the songs and of course, that haunting opener "Death Dream' -- with visions of suicide laid over shimmery guitars and soul-searing piano keys.

What I love about Dessner's style is that he also brings back tones of Peter Katis' early productions with the band but still allows them to roam freely, as per "Lump Street" which feels like modern Mogwai meets The National. All in all, the track I'll remember most is "Die Like A Rich Boy" -- an acoustic song awash with Hutchison's voice, powering through like a symphony. And that's what FR will always be to us, an orchestra of love and a reminder that Hutch did die rich, maybe not with money, but with the adoration of millions worldwide. Lives he touched, and lives he saved. Pity we couldn't do the same for him but ultimately, it's safe to say, we all miss him and hope he has found what he was looking for floating above us in the sky.