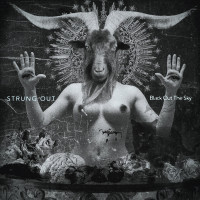 With Jordan Burns now gone from his near 25 year post as drummer extraordinaire for metal-tinged melodic hardcore stalwarts Strung Out, this newest, acoustic based release makes a whole lot more sense. It serves a purpose as a fresh start, a clean slate and a punctuation mark for a new chapter for the band. No doubt, Burns was an important member of Strung Out and his loss will be felt from longtime fans.

What Strung Out give us with “Black Out The Sky” is not an entirely acoustic endeavor. Drums permeate most of the 8 songs on this release in some form or another. As do an array of instruments played by an incredibly talented group of veteran musicians.

Still, though this record has an acoustic theme going for it, it feels musically uneven.

The two covers on this record, “Matchbook”, originally on “Twisted By Design”, and “Unkoil”, which debuted on “American Paradox”, are completely different in execution than the originals. Where “Matchbook” is given a very light hearted, straightforward treatment, what the band does with “Unkoil” is exciting and breathes new life into this classic Strung Out song. Even going so far as to challenge the original version in terms of quality. The building crescendo of this song is unparalleled by the original. Not to mention the lush strings, the haunting back up vocals and the spaghetti western guitar solo woven into this remake. This track is one of the highlights of this release. We get glimpses of that dark tone here and there on this record and it works so well. Not to mention, that eerie sound fits the cover art of this album, dark, devilish and perhaps even a little satanic, in the best kind of way.

The originals on “Black Out The Sky” either hit hard or miss the mark completely. First single, “Town Of Corazon”, is simply an acoustic song and while catchy enough, it fails to excite. “Duke Of Sorrow” is delivered to us with a country pop sheen with Cruz singing yet another song about the days of yore. The albums namesake song “Blackout The Sky”, a song mourning a lost romance, gives us a little more of that song writing skill that we’ve come to expect from Strung Out over the years.

Where this album TOTALLY redeems itself is with second single, “Requiem”. Plunked down in the middle of this 8-song ep, we get a dark, slow-burning song that may give you shivers. Beginning in hush tones with Cruz’s croon and acoustic picking, we are lead to an ominous chant and finally out of left field, a full metal breakdown that you could never see coming. If this short burst of metal is the direction Strung Out is headed in this new chapter of their career then I’m drinking whatever Kool-Aid they are pouring. This two minute and sixteen second burst of emotion about the end of the world is the pinnacle of this release. If only they could have mined this well a little deeper to make the entire record a dark, cohesive work. The contrast of dark and pop doesn’t vibe and when the beautiful “Requiem” ends we are thrust into the pop of “Duke Of Sorrow” completely ruining the mood that was set and wasting the tone that they had previously achieved.

This album does have its place in Strung Out’s catalog and serves as an apt palette cleanser after Burns’ departure. They just could have done so much more with this record in terms of songwriting. They touch upon glory a few times but ultimately give into the pop punk trappings that never really were Strung Out’s strong suit in the first place.