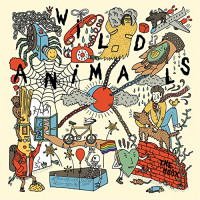 Wild Animals are a power-pop trio that hail from Madrid, but on listening, they sound like something from the mean, breezy streets of the OC. After listening to The Hoax, I went back into their archives becauseI I honestly didn't think they'd be that good, and what I found was very much a spiritual successor to Superchunk. Now, I know that comparison gets tossed around a lot but the band doesn't just limit themselves by it. In fact, The Hoax prides itself on sweet, sugary bursts of punk and upbeat anthems that throw nods to acts like Joyce Manor as well.

In terms of that Superchunk comparison, the buzzy power-pop aesthetic is most prominent on songs like "Lost In Translation", "Interrupted Girl" and "Everybody Loves You When You're Dead" -- and make no mistake, the record doesn't take itself too seriously as these tongue-in-cheek titles imply. Building on this, Wild Animals have a pretty snazzy dynamic going on here with all melodic, catchy singalongs coming at you at breakneck speeds, and leaving you wondering if they really can keep this momentum up for the entire duration of The Hoax.

Well, they're for real, and things get realer come "Science Fiction" and "Never Forget" which thick basslines and bouncy rhythms that remind me of a band I miss dearly... Banquets. But it's the final third of the act that really stands out and where the Joyce Manor parallels shine through. "Pockets of Fear" and "Connection" are these fizzy, quickfire indie punk jams that reiterate if you ain't down with Wild Animals just yet, you may well be missing out one of the best punk records of the year. Quite a surprise and a pleasant one at that.

Strung Out: Black Out The Sky

Crazy and the Brains: Out in the Weedz [EP]