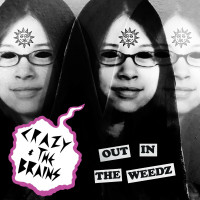 The key to Crazy & the Brains is that they are both totally relatable and completely alien at the same time. On Out in the Weedz, the band’s first release in almost three years, the crew returns in somewhat of a new incarnation. “Candy Yamz” is still driven by vocalist Chris Urban’s skewed perspective and xylophonist’s Jeff Rubin bouncing planks, but since their earliest days, they’ve added Brett Maverick on bass (though he’s been in the crew for a while now), and more recently, guitarist Ernest Young and drummer Jon Lango.

Young’s influence is palpable here and that’s a good thing. To a degree, the band’s folk-punk-bounce has been replaced by a Stooges style lashing, and these new songs hit the hardest out of anything they’ve released. Thankfully, Urban is a powerful enough singer to rise above the attack instead of getting washed away. As the band charges forward in a storming attack (Maverick’s bass and Lango’s drum lock together particularly well in a solid strike), Urban cries out mysterious proclamations like “I’m on a vapor wave” and “I’m out in the weeds!” You have no idea what the band is talking about except you sort of do.

Throughout the release, the band speaks more to the subconscious than the literal. Urban flips between wallowing in an isolationist misery and the sheer joy of being alive. That is, instead of telling the listener how to feel, they demonstrate it by pulling at unseen neurons in the back of your head, triggering feelings instead of describing them. That’s the trick- just ask Lou Reed, David Bowie, or even Rancid about their more obtuse tracks. To speak through feeling more than words can be the apex of great music and it sure is the apex here.

All that being said, let’s not get too heady. Just as the band contemplates existentialist damage, they switch gears to have a great deal of fun between their paeans to cosmic terror and bacchanalian revelry. “You can call me Quincy” is a reference to a somewhat forgotten 70s tv show (or maybe it’s to a modern actor) and the title track is smartly adorned with Maverick’s Beach Boys first-class style harmony. Seriously, the dude can do the Wilson for sure. “Nasty” contains somewhat unseemly reference to sour cream, not to mention its cool reggae breakdown.

At this point, Crazy & the Brains are harder, wilder, and frankly, more rocking than they were before. Smartly, they’ve hung on to what makes them special – flippant, crazed, chaotic mania. Here is band that is doing their own thing and you’d be hard pressed to find any band like them, yet somehow, they manage to speak to the voices in our heads that we all share across this stellar expanse. Or, if you prefer a less trippy angle, this band is wild, and frantic, and weird, and funny, and they are among the best of the new groups today.

The Melvins / All Souls: Live in Philadelphia