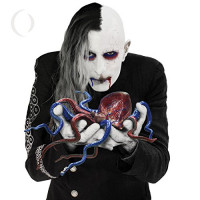 A Perfect Circle gained wide spread notoriety in the early 2000’s as Maynard James Keenan’s critically acclaimed side project and super-group along side his main project Tool. A Perfect Circle is one of those bands who has a devoted following that range from punk-rock fans, to indie heads and even a few hold over fans from the nu-metal era. Eat The Elephant is the bands first release in 14 years, and continues their legacy of creative and competent, progressive and atmospheric rock.

When A Perfect Circle first emerged, the band was sort of pigeon holed into the hard rock and metal community, more specifically the nu-metal community. However, the band always possessed a great deal more depth than the past contemporaries that they were lumped in with. Each successive release following 2000’s Mer de Noms shed a little bit more of the hard rock and metal aesthetic and incorporated more atmospheric rock and roll elements. On the bands fourth full length offering, the rock and roll focus is front and center, with the heaviness of past releases toned down.

While the band has left the heavier riffage of metal mostly in the past, A Perfect Circle has excelled at writing eerie and memorable melodies and choruses. The instrumentation of the record continues to be as impressive as always. Odd time signatures and bizarre changes accent and accompany the sprawling musical landscape the band has created. The progression of A Perfect Circle is admirable, and has continued despite the passing of 14 years.

Musically Eat The Elephant could be described as progressive rock or atmospheric rock. The album finds a happy medium between well-placed and memorable choruses and ambient and droning musical interludes. I have a difficult time finding a song I dislike on the record. Each track flows nicely from one to the next with no room for lulls or boredom. The song “TalkTalk” is a great example of the straightforward but bizarre melody A Perfect Circle excels at. My single complaint is that there are undeniable similarities between many of the tracks, primarily the tracks in the middle of the record. At times it is hard to determine if one song has ended and a new one has begun, or if one sprawling and atmospheric interlude has just branched itself into a new verse. That being said, despite this minor complaint the stand out tracks shine brightly throughout the record.

A Perfect Circle is not a band for everyone, but if you are feeling a bit experimental Eat The Elephant is a very enjoyable progressive rock record. The artwork and aesthetic is a little bit over the top, but if you can look past that, the expertly crafted music and lyrical melody is worth it.

The Melvins / All Souls: Live in Philadelphia

When Thieves Are About: We're Literally Almost There