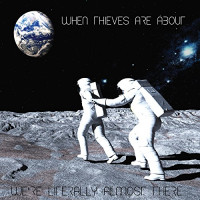 When Thieves Are About

The beauty of the internet is that sometimes based on things you have “liked” or looked at, sponsored ads will cater to you. While most of the time it is a creepy internet ad for something I had talked about in my living room, once in a while, it’s to check out a band I have never heard of. Enter the New Jersey quartet When Thieves are About. The band has been around for the past 10 years or so, however they have been signed to Manic Kat Records since 2015, and have released their latest album “We’re Literally Almost There” this May in 2018.

To identify them or compare them to a particular band would do the listener a disservice. Opening salvo “Kerry Wexford” contains equal parts Fullblast and Daggermouth, while the next track “Singe” could have been on Silverstein’s first album in 2003. As the album continues, dashes of Slick Shoes can be heard, as well as Rufio’s soaring choruses. None of these comparisons I am making should take away from the band. I realize that it can seem that I am saying the style has been done. What I am trying to convey is that the band has taken so much of their influences, and made their own thing, that you can hear it, but, it is truly something unique, like hearing Rise or Die Trying for the first time.

“Doppler Effect” slows things down for a little bit, before picking right back up with “We Sell Thomas”, which sounds like all the best parts of early 2000’s Atticus Compilation. The album ends with the 5 minute track “Inertia”, which has the progressiveness of Career Suicide era Wilhelm Scream, with multiple vocal tracks to boot, and an acapella ending.

At the end of the day, this was a great half hour spent, with an album full of musical curve balls to keep a longtime punk rock listener interested. While the band could easily say they sound like “Nofx mixed with Strung Out and Boys Night Out”, it’s much easier for a listener to draw their own conclusion. Like an onion, this album has a ton of layers. Unlike an onion, this album does not stink in the least.

A Perfect Circle: Eat The Elephant