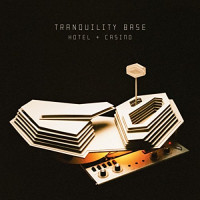 Tranquility Base Hotel and Casino (2018)

Let’s just say I definitely wasn’t expecting this kind of album from the Arctic Monkeys after the late-night come-ons of AM completely morphed them from scrappy rock and roll fusion auteurs into slick arena lotharios. From the looks of things, the party is winding down and the hangovers are lasting longer as Alex Turner abandons guitar for a lunar lounge lizard act. The lead Monkey has always had a way with cheeky turns of phrase and overly verbose tangents that are now starting to derail. The most obvious current artistic parallel here is Father John Misty, whose smug, ham-fisted self-awareness mars some really pointed philosophical considerations of humanity’s current cultural trajectory. It seems Turner is having an identity crisis and has completely jettisoned the former assumptions of who and what the Arctic Monkeys are.

The album begins with Turner admitting he “just wanted to be one of the Strokes,” an admission of an empty-headed pursuit of rock and roll hedonism without any sort of philosophical foundation to fall back on other than getting fucked and being fucked up. The interesting conceit of Tranquility Base Hotel and Casino is Turner’s “make-believe residency” from an Overlook Hotel in space as he lays waste to his existential career to date. Turner continues to admit he “wanted to be one of those ghosts / You thought you could forget / And then I haunt you via the rear-view mirror,” deadpanning that “an apparition is a cheap date.” “American Sports” continues to document the black humor of Turner’s despondency as he admits he’s “lost the money, lost the keys / But I’m still handcuffed to the briefcase,” suggesting that whatever valuable asset he has been carrying with him through his musical journey has perhaps become worthless due to his inability to access it any more.

The title track continues this bleak realization that maybe rock and roll (or maybe just the Arctic Monkeys) don’t have anything to offer against all the shit that’s going down here on Earth. Turner returns to “a bender back to that prophetic esplanade / where [he] ponder[s] all the questions but just manage[s] to miss the mark.” It’s hard to parse whether Turner is masking genuine self-reflection under this lounge lizard persona when he asks “And do you celebrate your dark side / Then wish you’d never left the house?” Is this true regret of the midnight rendezvous of AM and druggy explorations of Humbug? Is this the comedown? I’m again reminded of FJM’s bleak, absurd reflection of humanity on Pure Comedy that would sting so much more if it weren’t obliterated by stifling sarcasm.

The record is not an entire navel gaze as Turner also turns a sardonic eye to the state of the Western world. “Golden Trunks” plays as a thinly veiled jab at Trump whose “got himself a theme tune / They play it for him as he makes his way to the ring.” The visage of the “leader of the free world” as a flabby Balboa treating foreign affairs like “Get in the Ring” is a pretty frightening observation and recognizes that we’ve entered the reality television attitude toward the serious concerns of politics.

The album plays as one long riff on Bowie’s “Space Oddity,” but trades the tragedy of Major Tom for a gentrified moon colony with Turner opening the 4/5-star Information-Action Ratio taqueria on the roof of the titular hotel in “Four Out of Five.” Turner hints at a catastrophic event that has led to an exodus to the lunar surface, perhaps suggesting that after we trash Earth we can move our material excess to successive outer space habitats. The song slinks along and maintains the midtempo malaise of the rest of the album. Turner admits he wrote the bulk of the album on piano after receiving the instrument as a gift. Unfortunately, his composition technique has sidelined the rest of the band into anonymous supporting players. The guitars haven’t completely disappeared; they are just no longer at the forefront and serve to offer as window dressing to Turner’s logorrhea.

Overall, Tranquility Base Hotel and Casino is an interesting detour and definitely unexpected coming from this young arena rock band. Compared to AM’s sleazy midnight seductions, Tranquility babbles with predawn delirious absurdity. Perhaps it’s a modern classic in the making. The reason why it succeeds where Everything Now and Boarding House Reach fell short is its cohesive vision and unifying lyrical conceit. Everything Now has an interesting premise of how we are so saturated with technology and have lost patience without instantaneous experience, but the music on display dilutes the heavy lyricism with lightweight forgettable pop (a problem with Arcade Fire since Reflektor). Boarding House Reach was at least musically interesting but without anything of significance to say. As he labels himself a “swamp monster with a hard-on for connectivity,” Tranquility chases Turner’s humorous ramblings down the rabbit hole where we are just as likely to encounter Lord Byron as we are the world’s first monster truck front flip. However, despite its lyrical inventiveness, there’s not much variety in the velvet and sequins sonics of this new Arctic Monkeys offering. If you can stomach the Tony Clifton act, there’s an interesting amount to unpack thematically. Turner worries that the whole affair is “too clever for its own good.” No worries Alex, I’ll give it 3 ½ stars out of 5.